23 November 2011
The United Nations human rights chief today deplored the role of Egypt’s military and security forces in attempting to suppress recent protests demanding a return to civilian rule, particularly the reported killing of some 30 protesters, and called for an independent probe into the abuses.

High Commissioner Navi Pillay called on Egyptian authorities to end the “clearly excessive” use of force against protesters, including the apparent improper use of tear gas, rubber bullets and live ammunition, according to a news release issued by her office (OHCHR).

“Some of the images coming out of Tahrir [square], including the brutal beating of already subdued protesters, are deeply shocking, as are the reports of unarmed protestors being shot in the head,” she stressed.

“There should be a prompt, impartial and independent investigation, and accountability for those found responsible for the abuses that have taken place should be ensured.”

On Monday Secretary-General Ban Ki-moon and several independent UN human rights experts voiced their alarm at the violent crackdown on protesters, and urged Egypt’s interim authorities to guarantee the protection of key liberties ahead of next week’s parliamentary elections.

UN officials have also called on all Egyptians to preserve the spirit of the historic changes that took place earlier this year, when popular protests aimed at greater freedoms toppled the long-standing regime of Hosni Mubarak.

Ms. Pillay noted that “the actions of the military and security forces, instead of improving security and helping Egypt’s difficult transition to democracy, have once again simply served to inflame the situation, resulting in huge numbers of people taking to the streets to demand their rights.

“The more they see fellow protesters being carted away in ambulances, the more determined and energized they become,” she stated.

The authorities have an obligation to ensure a peaceful and safe environment for next week’s polls, she said, adding that the people of Egypt deserve to exercise their right to vote in the country’s first elections since Mr. Mubarak’s departure in a violence-free environment.

She also renewed her call for the lifting of the state of emergency, the implementation of an effective monitoring system during the elections, the full eradication of torture and ill-treatment, the adoption of a comprehensive approach to transitional justice and a comprehensive reform of the security sectors, all of which were identified as key future steps by the fact-finding mission she dispatched to Egypt in April. 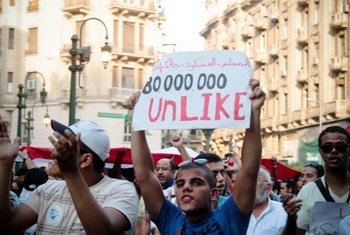 21 November 2011
Secretary-General Ban Ki-moon and four independent United Nations human rights experts today voiced alarm at the violent crackdown on protesters in Egypt, and urged the country’s interim authorities to guarantee the protection of key liberties ahead of next week’s parliamentary elections.