Mr. Ban was in the Central Kalimantan region of Borneo, which has been chosen by the Indonesian Government for a pilot programme of the Reducing Emissions from Deforestation and Forest Degradation (REDD+) initiative.

The initiative aims to create a financial value for the carbon stored in forests, and provides added incentive for governments and local communities to preserve and sustainably manage them.

“REDD+ can be a win-win-win for local communities, for Indonesia and the world,” said the Secretary-General.

“But let me be clear: While REDD+ can play an effective role in engaging developing countries in the global fight against climate change, it is not a substitute for deep greenhouse emissions reductions in developed countries. It is complementary.”

Globally, deforestation accounts for some 17 per cent of global carbon emissions – the second largest source after the energy sector, Mr. Ban pointed out. Each hectare of forest lost or degraded contributes to global greenhouse emissions.

“As we move ahead with REDD+, and for the initiative to be a success, it will be crucial to obtain the free, prior and informed consent of the communities who depend on forest resources,” he said, adding that he is aware that there is misunderstanding, apprehension and opposition about REDD+.

“Indigenous people, in particular, are concerned that REDD+ is associated with unsustainable extractive industries that harm their well-being. Making REDD+ a success here in Kalimantan, and elsewhere, will require the commitment and cooperation of all stakeholders,” he stated.

“We must ensure that all have a voice. This is a crucial test for REDD+ and for Indonesia.”

He added that the UN will do its part to help this groundbreaking partnership realize its potential, beginning with the establishment of the UN Office for REDD+ Coordination in Indonesia (UNORCID), whose opening the Secretary-General attended today.

The UN is also consulting with government and civil society on improving forest governance and anti-corruption, as well as working to measure and understand the physical environment and the social implications of REDD+ to adjust efforts as they unfold.

“We will facilitate environmental and social safeguards,” said Mr. Ban. “And we will help to establish Green Schools, and work on forest fire prevention and sustainable plantations.

“In sum, our work will benefit local people while helping to address the global problem of climate change.”

He noted that Kalimantan has extensive forest cover and peatland, and that many of its inhabitants are custodians of an invaluable wealth of forest-based knowledge.

“Yet these men and women – and these precious ecosystems – are under threat from the global demand for palm oil, timber, minerals and other commodities,” said Mr. Ban, who met with representatives of communities affected by deforestation in the village of Kalampangan.

According to a report issued in September by the UN Environment Programme (UNEP), conserving key forests in Indonesia under the REDD+ programme could generate billions of dollars in revenue, up to three times more than felling them for palm oil plantations.

The report recommended designating new forested areas for REDD+, taking into account the multiple benefits for carbon storage, orangutan habitat conservation and the protection of ecosystem services, while expanding palm oil plantations on land with low current use value and avoiding agricultural and timber concessions where conservation value is high.

While in Kalimantan, Mr. Ban also visited a health clinic, where he immunized a child against polio and met with pregnant women and health workers. A key purpose of his trip to Bangladesh, Thailand and Indonesia has been to showcase their progress in advancing women’s and children’s health.

“Indonesia understands that when you protect the health of individual women and children, you protect the well-being of the whole community,” Mr. Ban later told reporters. “That is my message here and around the world.”

The Secretary-General is now in Bali, where he will take part in, among other events, the fourth summit between the UN and the Association of Southeast Asian Nations (ASEAN). 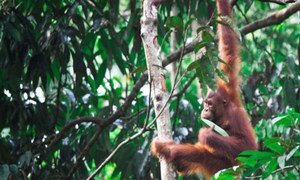