UNEP
Investing in forests is win-win for communities, climate and orangutan conservation.

28 September 2011
Conserving key forests in Indonesia could generate billions of dollars in revenue, up to three times more than felling them for palm oil plantations, under a United Nations carbon reduction plan that would also secure water supplies and protect critically endangered orangutan apes, according to a report issued today.

Under the UN Framework Convention on Climate Change (UNFCCC), governments are negotiating a mechanism to provide payments for reduced emissions from deforestation and forest degradation and other activities (REDD+), creating incentives for developing countries to cut global warming gasses from forested lands by putting a financial value for the carbon stored in forests.

Overall forest degradation through agricultural expansion, conversion to pastureland, infrastructure development, destructive logging and fires currently account for nearly 18 per cent of worldwide greenhouse gas emissions, more than the entire global transport sector and second only to the energy sector.

Many coastal peat-rich forests in Sumatra, where dense populations of the last 6,600 Sumatran orangutans survive, may be worth up to $22,000 a hectare at current carbon prices, compared with less than $7,400 a hectare when cleared for palm oil plantations, according to the report by the UN Environment Programme (UNEP) under its Great Apes Survival Partnership (GRASP), which Indonesia requested.

He noted that here had been a reported 50 per cent decline in water discharges in as many as 80 per cent of rivers due to deforestation in the Aceh and North Sumatra regions, with serious implications for agriculture and food security including rice production and human health.

The report recommends designating new forested areas for REDD+, taking into account the multiple benefits for carbon storage, orangutan habitat conservation and the protection of ecosystem services, while expanding palm oil plantations on land with low current use value and avoiding agricultural and timber concessions where conservation value is high.

The forested peatlands of Sumatra are among the most efficient carbon stores of any terrestrial ecosystem. In the last two decades, 380,000 hectares of Sumatran forests were lost to illegal logging each year, with an annual loss in carbon value estimated at more than $1 billion.

Nearly half of Sumatra’s forests disappeared between 1985 and 2007 and in the last decade, close to 80 per cent of the deforestation in the peatlands was driven by the expansion of oil palm plantations, while over 20 per cent was due to other uses, such as candlenut or coffee production.

Fewer than 6,600 Sumatran orangutans exist in the wild today, down from an estimated 85,000 in 1900, a 92 per cent drop. If this rate were to continue, the Sumatran orangutan could become the first of the great apes living today to go extinct in the wild, with local populations in parts of Sumatra disappearing as early as 2015. 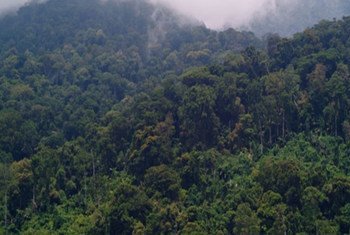 13 September 2011
The United Nations and a coalition of financial institutions warned today that huge losses, both financial and environmental, could result from a failure to agree on a climate change agreement that spurs private sector investment in efforts to reduce deforestation and forest degradation.