The annual UN Human Development Report, this year entitled Sustainability and Equity: A Better Future for All, argues that human development is intricately linked to environmental sustainability, and that this in turn must be approached as a matter of basic social justice for current and future generations.

“The report’s central message is that equity and sustainability are inextricably linked - that one will not be achieved without the other.  It raises a number of issues which are important for our understanding of this relationship and offers guidance for moving forward on both dimensions,” said UN Development Programme (UNDP) chief Helen Clark at the report’s launch in Copenhagen.

The report, presented by Miss Clark and Danish Prime Minister Helle Thorning-Schmidt, notes that remarkable progress has been made by poor countries with low rankings on the Human Development Index (HDI). In the past 40 years alone, the countries placed in the lowest 25 per cent of the global rankings improved their overall HDI by 82 per cent.

The report states that if this pace of improvement continues, most countries would be able to enjoy the HDI of the top 25 per cent by the year 2050, which would represent an extraordinary achievement for global human development.

However, the report also warns that if left unchecked, environmental degradation could reverse this growth trend, requiring immediate action from governments to prevent this from happening.

“[The report] asks whether we can expect the positive trends of the last 40 years to continue and improvements to be sustained for the people who will live on this planet over the next four decades,” said Miss Clark.

The report paints a scenario in which food prices could soar by up to 50 per cent and efforts to expand water, sanitation and energy access to billions of people could be reversed, particularly in South Asia and sub-Saharan Africa if countries fail to take measures to achieve sustainability.

The report notes that people in the poorest countries are particularly vulnerable to climate-driven disasters such as drought and flooding, as well as exposure to air and water pollution. It adds that it is not only environmental disasters, but general environment deterioration which threatens other factors crucial to human development.

“Half of all malnutrition worldwide is attributable to environmental factors, such as water pollution and drought-driven scarcity, perpetuating a vicious cycle of impoverishment and ecological damage,” the report says.

In addition, the report stresses that growth and high living standards need not be tied to carbon-fuel activities, and presents evidence that fossil-fuel consumption does not correspond with other measures of human development such as life expectancy and education, making it possible for countries to experience growth while at the same time reducing their carbon footprint.

“Growth driven by fossil fuel consumption is not a prerequisite for a better life in broader human development terms,” Miss Clark said. “Investments that improve equity – in access, for example, to renewable energy, water and sanitation, and reproductive health care – could advance both sustainability and human development.”

The report also includes the HDI rankings, which covered 187 countries according to standard of living taking into account health, education and income data.

This year, Norway, Australia and the Netherlands lead the rankings, while the Democratic Republic of the Congo (DRC), Niger and Burundi are at the bottom of the list.

♦ Receive daily updates directly in your inbox - Subscribe here to a topic.
♦ Download the UN News app for your iOS or Android devices.
human development 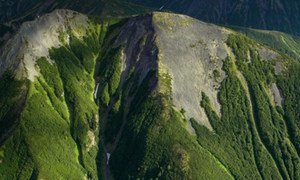 Concerted and rapid action is urgently needed to curb resource depletion and ensure human activities do not destroy the very environment that supports economies and sustains life, warned a United Nations report released today, which tracks the environmental changes the planet has gone through over the past 20 years.