18 October 2011
A United Nations expert on torture today called on all countries to ban the solitary confinement of prisoners except in very exceptional circumstances and for as short a time as possible, with an absolute prohibition in the case of juveniles and people with mental disabilities.

“Segregation, isolation, separation, cellular, lockdown, Supermax, the hole, Secure Housing Unit… whatever the name, solitary confinement should be banned by States as a punishment or extortion technique,” UN Special Rapporteur on torture Juan E. Méndez told the General Assembly’s third committee, which deals with social, humanitarian and cultural affairs, saying the practice could amount to torture.

“Solitary confinement is a harsh measure which is contrary to rehabilitation, the aim of the penitentiary system,” he stressed in presenting his first interim report on the practice, calling it global in nature and subject to widespread abuse.

Indefinite and prolonged solitary confinement in excess of 15 days should also be subject to an absolute prohibition, he added, citing scientific studies that have established that some lasting mental damage is caused after a few days of social isolation.

“Considering the severe mental pain or suffering solitary confinement may cause, it can amount to torture or cruel, inhuman or degrading treatment or punishment when used as a punishment, during pre-trial detention, indefinitely or for a prolonged period, for persons with mental disabilities or juveniles,” he warned.

He told a later news conference these circumstances could include the protection of inmates in cases where they are gay, lesbian or bisexual or otherwise threatened by prison gangs.

There is no universal definition for solitary confinement since the degree of social isolation varies with different practices, but Mr. Méndez defined it as any regime where an inmate is held in isolation from others, except guards, for at least 22 hours a day.

In his report he noted that in the United States an estimated 20,000 to 25,000 individuals are being held in isolation, while in Argentina a prevention of violent behaviour programme consists of isolation for at least nine months and, according to prison monitors, is frequently extended.

He warned of an increased risk of torture in these cases because of the absence of witnesses and said some detainees have been held in solitary confinement facilities for years, without any charge and without trial, as well as in secret detention centres.

Mr. Méndez told the news conference that he had been following the case of US soldier Bradley Manning, detained in connection with his alleged leaking of secret cables to the WikiLeaks website. Mr. Manning was held in solitary confinement for eight months but has now been moved and is no longer subject to the same restrictions, he noted, adding that he would release a report on the issue in a few weeks.

Examples he cited in his report from around the world included Kazakhstan where solitary confinement can last for more than two months, and the US terrorist detention centre in Guantánamo Bay, where experts found that although 30 days of isolation was the maximum period permissible, some detainees were returned to isolation after very short breaks over a period of up to 18 months.

Elsewhere, two prisoners are reported to have been held in solitary confinement in Louisiana, US, for 40 years after attempts for a judicial appeal of their conditions failed, he noted. In China an individual sentenced for “unlawfully supplying State secrets or intelligence to entities outside China” was allegedly held in solitary confinement for two years of her eight-year sentence.

“Social isolation is one of the harmful elements of solitary confinement and its main objective. It reduces meaningful social contact to an absolute minimum,” Mr. Méndez told the committee, noting that a significant number of individuals will experience serious health problems regardless of specific conditions of time, place, and pre-existing personal factors.

He called for an end to solitary confinement in pre-trial detention based solely on the seriousness of the alleged offence, as well as a complete ban on its use for juveniles and persons with mental disabilities.

Solitary confinement for shorter terms or for legitimate disciplinary reasons can amount to cruel, inhuman or degrading treatment or punishment in cases where the physical conditions of prisons, such as sanitation and access to food and water, violate the inherent dignity of the human person and cause severe mental and physical pain or suffering. 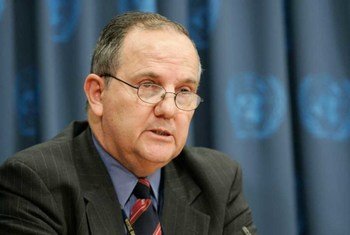 12 July 2011
The United Nations independent expert on torture today voiced concern over restrictions imposed by the United States on access to detainees, stating that it is vital for him to have unmonitored access to Bradley Manning, the US soldier detained for allegedly leaking classified information to the WikiLeaks website.