The number of internally displaced persons (IDPs) still in camps in Haiti after their homes were destroyed by last year’s catastrophic earthquake has declined from 1.5 million to 600,000, but hardship in the settlements has not eased, the United Nations humanitarian chief said today at end of her three-day visit to the country.

Valerie Amos, the Under-Secretary-General for Humanitarian Affairs, visited the Accra camp, which hosts 25,500 people in the commune of Delmas and spoke to residents who told her that they lived in fear of eviction because they had nowhere else to go.

Representatives of the camp’s women’s committee narrated their daily challenges of caring for their families in an environment there are no job opportunities and living in cramped conditions with poor lighting that put them at risk of gender-based violence.

Limited funding has led to a decline in the number of humanitarian agencies working in key sectors, such as water and sanitation and camp management. Hundreds of latrines are now unusable and overflow, especially during the current rainy season, posing significant health risks, even as efforts to keep the cholera epidemic at bay continue.

“We cannot forget the hundreds of thousands of vulnerable people still in camps,” said Ms. Amos, who is also the UN Emergency Relief Coordinator. Humanitarian organizations, including UN agencies, have appealed for $382 million for relief operations in Haiti this year, but that request is only 52 per cent funded.

“The scale of destruction and suffering caused by the earthquake and the cholera epidemic, combined with Haiti’s high vulnerability to natural disasters, are the visible part of the iceberg. What we need is more strategic decision-making and coordination that looks at improving longer-term structural issues, said Ms. Amos.

She also visited the first ever sewage treatment centre in Haiti which was started with initial funding from the UN-managed Central Emergency Response Fund (CERF) and is now run by the Haitian Water Authority with support from the UN.

Cholera has claimed the lives of more than 6,300 people in Haiti, and the disease has affected an estimated 450,000 others since October last year. 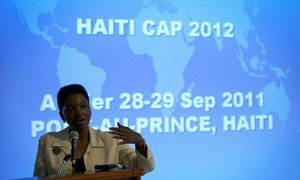