Valerie Amos, Under-Secretary-General for Humanitarian Affairs, on a visit to Haiti
29 September 2011

Valerie Amos, the Under-Secretary-General for Humanitarian Affairs, who is visiting Haiti, said she had gone to a camp housing 25,000 people and found that water and sanitation services had deteriorated because of a lack of resources.

“I was very concerned when I visited the camp – water and sanitation facilities have deteriorated over the last few months because of that lack of resources and many of our NGO [non-governmental organization] partners have left.

“We have to help those remaining people while at the same time working with the Government on the longer-term sustainable development,” said Ms. Amos, who is also the UN Emergency Relief Coordinator, in an interview with UN Radio.

“One of the major concerns I have is that humanitarian appeal for Haiti is only half funded because there is a lot of focus for longer-term development, which I think is absolutely right – I don’t think we want to stay doing humanitarian work for longer than we need to.”

She said will be speaking to donor representatives both in Port-au-Prince, the Haitian capital, and in New York to stress that resources were still required for humanitarian services, which should be provided simultaneously with the ongoing development and reconstruction work.

Ms. Amos said she briefly met with President Michel Martelly yesterday, who she said made it clear that his focus is on economic growth and creating conditions conducive for investment so that people can have job opportunities.

“My sense from speaking to the President, and it was a brief meeting, is that he is frustrated because he wants investment, he wants economic growth, he wants jobs for the people, he wants development,” she said.

The people Ms. Amos spoke with in the camps also talked about the importance of having jobs and education opportunities for their children.

“The humanitarian crisis in Haiti is not over. While major efforts are being made to put the country on the road to recovery, important humanitarian needs remain and must be addressed,” she said when she arrived in Port-au-Prince yesterday.

Some 600,000 people displaced by the devastating earthquake in January last year still live in nearly 900 camps. They are facing the increasing threat of evictions from the sites, as well as growing insecurity.

The situation has been compounded by a cholera epidemic, food insecurity affecting 4.5 million people and an active hurricane season that has already destroyed homes and crops. 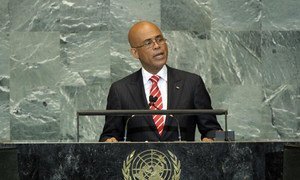 Haitian President Michel Martelly said today he does not want the United Nations peacekeeping mission to leave but to stay on to assist the impoverished country as his Government seeks to tackle the problems of education, jobs, the environment and the rule of law.