Famine warning signs must never again be ignored, as they were in Somalia – UN

Famine warning signs must never again be ignored, as they were in Somalia – UN

27 September 2011
Stressing that the warning signs of impending disaster were evident, but ignored, long before drought and famine began killing tens of thousands of people in the Horn of Africa, the United Nations today swung its support behind a ‘Never Again’ campaign to end extreme hunger.

“Not only must the international emergency response system become more flexible in responding to early warnings, we must have more regular support for risk reduction at national and community level,” Secretary-General Ban Ki-moon’s Special Representative for Disaster Risk Reduction Margareta Wahlström said of the non-governmental organization (NGO) initiative launched at a mini-summit on Somalia at UN Headquarters last Saturday.

The campaign – Never Again: A Charter to End Extreme Hunger – has five essential elements: fixing the flaws of the international emergency system; supporting local food production; ensuring services and protection for the poorest; making available food everyone can afford; and reducing armed violence and conflict.

Tens of thousands of Somalis have already starved to death and more than 3.2 million others are on the brink of starvation in a drought and famine that has affected 13.3 million people there and in three other countries, Djibouti, Ethiopia and Kenya.

“The Horn of Africa crisis is a wake-up call for aid agencies, governments and donors alike. Given the collective experience of responding to drought emergencies over the last 50 years it seems almost beyond belief that we are once more desperately fighting a drought-fuelled famine which is threatening the lives and livelihoods of 13 million people,” said Ms. Wahlström, who heads the UN’s disaster risk reduction office (UNISDR).

“As Oxfam, Save the Children, ONE and others rightly point out in this charter, all the warning signs were there in the Horn of Africa two years ago but the warnings were not acted on. The result is that more lives will be lost and more money will be spent because there was little or no support to timely and low-cost measures that would have reduced the risk of drought turning into a famine.”

She particularly welcomed the charter’s call for disaster risk reduction and climate change adaptation to be put at the heart of sustainable development.

The signatories commit to linking non-political, needs-based early warning signs of disasters with a timely and appropriate response, with donors supporting national and community preparedness plans to avert the worst effects such as acute malnutrition.

The charter criticizes “decades of under-investment in small scale food producers and ineffective management of natural resources” and calls for longer-term plans to fight food insecurity and malnutrition.

The signatories commit to protect at an absolute minimum the poorest 10 per cent of the population from the impact of food crises with safety nets, including direct cash payments based on need alone, specifically addressing the food and nutrition needs of women and children.

They also commit to scaling up strategic and emergency food reserves, tackling the causes of high and volatile food prices, and providing sufficient aid based on need where insecurity is destroying the chances of life and sustainable development.

About 20,000 acutely malnourished children were being treated through feeding centres, and UNICEF was working to expand to reach over 30,000 per month, spokesperson Marixie Mercado told a news briefing in Geneva.

The number of people overall receiving food aid nearly doubled from July to August and is on pace to do so again in September, Corinne Momal-Vanian, Director of the UN Information Service in Geneva, told the briefing. In July, 770,000 Somalis received food aid and that figure stood at 1.39 million as of 19 September. 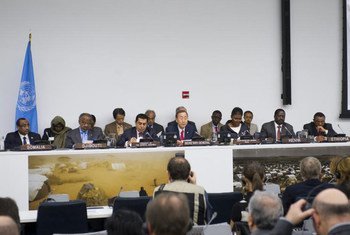 24 September 2011
At least $218 million in new aid for the Horn of Africa was pledged today at a United Nations mini-summit held to raise awareness about the region’s humanitarian crisis and tackle the root causes of its recurring drought-related food shortages.