Only the United Nations is capable of responding to the world’s major challenges and countries should work together through the Organization to seek effective solutions to crises and problems, Ireland’s Foreign Minister said today.

Eamon Gilmore told the General Assembly’s annual general debate that the UN has been a “constant anchor” as the world deals with challenges ranging from violent conflict and human rights abuses and extreme poverty and environmental degradation.

“With an increasing need for global solutions, the United Nations, which represents almost all the countries on Earth, has the political, moral and legal authority to act. While there may be no easy answers to the questions being posed, our best chance of finding effective responses lies in the collective deliberation and action provided for by this Organization.”

Mr. Gilmore added that the UN is also the embodiment of freedom and equality, values outlined in the UN Charter and “a bulwark… in a changing and uncertain world.”

He stressed that freedom and equality must underpin the global response to many challenges, such as resolving conflicts, ending human rights abuses and eradicating hunger. 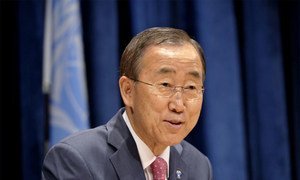 The world is undergoing “a moment of uncommon turbulence,” facing enormous political, economic, humanitarian and environmental challenges, but the UN stands ready to help deal with all of them, Secretary-General Ban Ki-moon said today.