23 September 2011
Costa Rica and El Salvador, two countries highly affected by drug-related violence in recent years, have urged the United Nations to help fight drug cartels and organized crime, and called on Member States with high numbers of drug consumers to take the lead on the issue.

“As a result of our location between the largest centres of production and demand in the world, we have become a target to the dynamic of death that they both create, and we must bear the burden of extraordinary material, institutional and human costs What for the main perpetrators of these atrocities are mere ‘collateral damages,’ for Central Americans represent extreme challenges and deep wounds.”

Ms. Chinchilla added: “From here stems our greatest frustration. Thus we demand that the international community, in particular the greatest consumers of drugs and suppliers of arms that materialize the violence, assume completely and without further delay, the responsibility of their actions.”

“The international community must understand that it also suffers from this problem,” he said in his address today. “There is no nation in the world where there hasn’t been a drug consumer that has obtained drugs from the hand of criminal drug networks.”

He also said that Central American countries will continue to combat drug trafficking by strengthening their institutions, seeking transparency in their security bodies, and helping young people stay away from gangs. But he stressed that there would be no progress without the leadership of consumer countries, and called on the United States to take immediate measures.

“El Salvador and Central America are making great efforts to face this reality but the numbers are not on our side,” he said.

“We are talking about a drug trade route that moves about $100,000 million per year, and that culminates in the biggest market in the world and the main consumer of these substances: the United States. Not even a big country like Mexico can take a step on its own and have any possibilities of success in this battle in the face of such a terrorist threat. 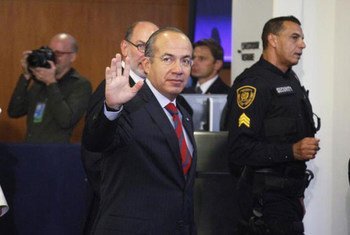 21 September 2011
Mexico, where tens of thousands of people have been murdered and mutilated in drug wars over the past five years, today called on the United Nations to help establish strict controls in producer and supplier countries on the high-powered weapons that feed the arsenals of traffickers.