Drug trafficking and related violence constitutes a serious threat to the rule of law in Central America, a new United Nations report states, stressing the need to strengthen institutions so they are not exploited by cross-border criminals.

The study, “Transnational Organized Crime in Central America and the Caribbean: A Threat Assessment,” examines various aspects of the impact of the major trafficking flows of cocaine, and fire arms as well as the sex trade and migrant smuggling in the region.

The report, produced by the UN Office on Drugs and Crime (UNODC), argues that even if the northbound cocaine flows dwindle, criminal groups would vie for profits from other highly lucrative illicit activities and continue to spread mayhem.

“The relationship between development, the rule of law and security needs to be fully understood,” said UNODC Executive Director Yury Fedotov. “Drugs and crime are also development issues, while stability can be promoted by embracing human rights and access to justice.”

Wedged between the suppliers of coca in the south and the consumers of cocaine in the north, the region has become a transit corridor. However, the high rates of violence are not always associated with drug trafficking, UNODC said in a news release. El Salvador, for example, has a relatively low cocaine flow of four to five tons per year but registers the highest sustained murder rate in the region (over 65 per 100,000 between 2000 and 2010).

“Rather, it seems that lower demand and increased law enforcement has sparked brutal turf wars between traffickers as they fight over a share in a reduced market,” the report says.

In Mexico, the implementation of a security strategy in 2006 seeking to disrupt the northbound supply of cocaine triggered conflict over new “plazas” at key border crossings, notably along the Guatemalan/Honduran border.

The study points out that flows of drug trafficking have become concentrated in the countries least capable of dealing with them, and emphasizes that it is essential to tackle impunity and corruption, while building police and criminal justice capacity.

The report will be discussed at a high-level presentation to ministers and ambassadors from the Central American region tomorrow in New York on the margins of the 67th session of the General Assembly.

♦ Receive daily updates directly in your inbox - Subscribe here to a topic.
♦ Download the UN News app for your iOS or Android devices.
drug trafficking 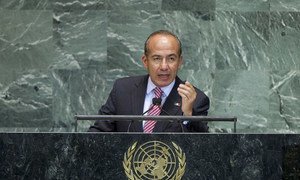 In his remarks to the United Nations General Assembly today, Mexican President Felipe Calderón Hinojosa today strongly urged Member States to increase their efforts to combat the illegal drug trade, stressing that it is necessary to explore new options to find a solution to this scourge, which claims thousands of lives every year.