An independent United Nations human rights expert today called on Member States to recognize “the reality of Palestinian statehood,” and urged Israel to listen to the will of the millions of people who have suffered under its occupation.

“The upcoming debate on Palestine’s initiative at the United Nations provides a momentous occasion for the international community to respond to a legacy of injustice,” said Richard Falk, the Special Rapporteur on the situation of human rights in Palestinian territories occupied since 1967.

In a meeting on Monday, the President of the Palestinian Authority, Mahmoud Abbas, told Secretary-General Ban Ki-moon he intended to submit an application this Friday for Palestine to become a UN Member State.

“Palestine’s status as a State is not merely symbolic,” said Mr. Falk. “It empowers Palestine with rights and duties under international law, such as full jurisdiction over its territory, legal standing to defend itself from other States, and the capacity to join international treaties – including human rights treaties.”

Mr. Falk said that for over 44 years, Palestinians in the West Bank, including East Jerusalem, and the Gaza Strip have suffered under Israel’s “oppressive occupation.” Israel, he noted, has steadily transferred its population into hundreds of settlements on Palestinian territory, while subjecting Palestinians to widespread and systematic violations of their basic human rights.

“While many Israelis may be comfortable with the status quo, the ongoing transformation of the region brings with it new realities,” said the expert.

“I encourage Israel to heed calls throughout the region for governance based on the will of the people. The will of the Palestinian people must be respected too, starting this week at the United Nations and until Palestinians can enjoy the right they share with all other peoples of the world – the right to self-determination.”

He added that Israel and “its zealous backers in the United States” should take this chance to live up to the promise of the two-State solution, noting that nearly 20 years of negotiations have actually given Israel time to undermine that goal. 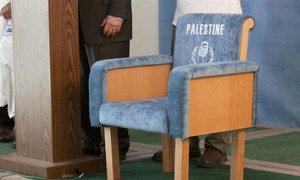 The President of the Palestinian Authority, Mahmoud Abbas, told Secretary-General Ban Ki-moon today that he intends to submit an application this Friday for Palestine to become a United Nations Member State.