The leaders of Kuwait and Bahrain today at the General Assembly called for an end to Israeli occupation of Arab territories and the creation of a Palestinian State, a move they said would resolve conflict in the Middle East.

“Six decades have passed, and the United Nations still stands incapable of finding a solution to the Palestinian Question and putting an end to the Israeli occupation of Arab territories,” said Sheikh Nasser Al Mohammad Al Ahmad Al Sabah, the Prime Minister of Kuwait, in his speech to the Assembly’s general debate in New York.

“What really evokes concern is that the international community stands as a spectator of all those Israeli practices and policies, without opposing or deterring them, despite their clear contravention and violation of the most simple rules of international law and the resolution of international legitimacy,” he said.

The Kuwaiti leader urged the international community to put pressure on Israel to withdrawal from Palestinian and other Arab territories so that Palestinians can achieve their right to self-determination and establish a State with Jerusalem as its capital.

“We wish to renew our full commitment and support to the bid of the Palestinian Authority and its endeavours to obtain membership of the United Nations as an independent and full Member State.”

The King of Bahrain, Hamad bin Issa Al Khalifa, for his part told the Assembly that the creation of a Palestinian State would “end an era of bitter Arab-Israeli conflict, subject to Israeli withdrawal from all occupied Arab territories.”The Emir of Qatar, Sheikh Hamad bin Khalifa Al-Thani, in his address to the general debate yesterday, hailed calls for political reform in the Middle East and North Africa, saying the regions “abounded in great expectations.”

He said that Qatar has always had a clear policy on the rules governing Arab, regional and international relations, which he said was based on reconciliation and harmony among peoples and nations.“On the other hand, we, as well as others, have been unable to turn a deaf ear or blind eye to the calls of the wounded seeking help from near and far, against an entrenched oppression,” he said.

The Sheikh also had a tête-à-tête with Secretary-General Ban Ki-moon, during which they exchanged views on a number of regional issues, including Libya, Iraq, the Middle East and Darfur peace processes.

Mr. Ban paid tribute to the role played by Qatar in supporting the UN’s work, stressing the country’s role in the Darfur peace process and its efforts to settle other regional issues. 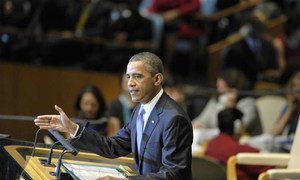 Peace between Israel and the Palestinians can only be attained through negotiations, United States President Barack Obama told the General Assembly today, urging both sides to make compromises to break the current deadlock and saying that “statements and resolutions” at the United Nations will not resolve the conflict.