21 September 2011
Secretary-General Ban Ki-moon told world leaders at the UN today for the General Assembly’s annual high-level debate that they face critical choices on global issues to ensure the well-being of future generations.

“We have five imperatives – five generational opportunities to shape the world of tomorrow by the decisions we make today,” the Secretary-General said, as he presented his annual report on the work of the Organization before the start of the debate.

“The first and greatest of these is sustainable development — the imperative of the 21st century,” said the Secretary-General. “We must connect the dots between climate change, water scarcity, energy shortages, global health, food security and women’s empowerment. Solutions to one problem must be solutions for all.”

Mr. Ban called on leaders to reach a binding climate change agreement, one with more ambitious national and global emissions targets, and to take urgent action on cutting emissions and on adaptation.

Turning to prevention, he asked those gathered to consider the savings of acting before conflicts erupt – by deploying political mediation missions, for example, rather than troops. This will require support and resources, he noted, to raise ‘prevention’ from an abstract concept to a core operating principle across the spectrum of the UN’s work.

Building a safer and more secure world is the core responsibility of the UN, Mr. Ban continued, citing the Organization’s efforts in hotspots such as Côte d’Ivoire, Afghanistan, Iraq, Sudan and the Middle East.

“In the Middle East, we must break the stalemate. We have long agreed that Palestinians deserve a State. Israel needs security. Both want peace. We pledge our unrelenting efforts to help achieve that peace through a negotiated settlement,” he stated.

The UN is capable today of more rapid and effective response than ever before, Mr. Ban added, and it remains the “world’s first emergency responders” – noting recent disasters in Pakistan, Haiti and beyond.

The Secretary-General appealed to leaders to help save the children of the Horn of Africa, where more than 13 million people are in crisis due to famine, conflict and drought, as well as to keep pushing for disarmament and non-proliferation to fulfil the dream of a world free of nuclear weapons.

Recalling this year’s dramatic events in North Africa and the Middle East, Mr. Ban said it is important to help make the Arab Spring “a true season of hope for all.” Whether a country is emerging from war, moving from autocracy to democracy or from poverty to a new prosperity, the UN must help find the right path.

“That may involve support to restore justice or build back public services. It may mean helping to organize elections or write a constitution,” noted Mr. Ban.

“Our challenge today is to cement this progress — and apply the lessons learned,” he added, stating that nowhere is this challenge more clear than in the efforts to help South Sudan build a functioning State after decades of conflict.

He also highlighted the need to work with – and work for – women and young people. “Women hold up more than half the sky and represent much of the world’s unrealized potential… And we will focus on the new generation. Young people are more than our future. They are also our present, both in numbers and how they drive political and social change.”

In responding to all of these challenges, solidarity will be critical, said Mr. Ban, especially in the area of resources, without which the UN cannot deliver.

“Today, I ask governments that have traditionally borne the lion’s share of the costs to not flag in their generosity. Budgets are tight. Yet we also know that investing through the UN is smart policy. Burden-sharing makes the load lighter. Scaling back is no answer.”

It is also necessary to adapt to changing times, the Secretary-General noted. “At this time of austerity, we must do more with less. We must invest the global taxpayers’ money wisely, eliminate waste and avoid duplication by Delivering as One.

“Accountability and transparency remain our watchwords. We are accountable to the Member States. Yet we cannot become more efficient without their strong and consistent support,” he stated.

The world body also needs to streamline the budget process, as well as build a more modern and mobile workforce. In addition, it is vital to do everything possible to protect UN staff, he said.

“We have lost so many lives; the UN has become too soft a target. Today, we remember with gratitude those who serve with such dedication in so many dangerous places.”

The peoples of the world – soon to be 7 billion strong – are looking to the leaders gathered today, said Mr. Ban. “They need solutions. They demand leadership. They want us to act. To act with compassion, courage and conviction. To act in concert – nations united at the United Nations.”

Nicaraguan elected to head next session of General Assembly 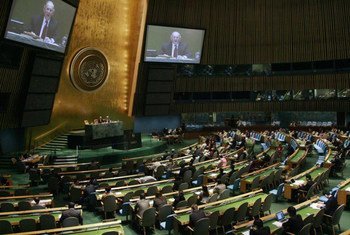 13 September 2011
The General Assembly today opened its annual session with a fervent plea for cooperation in tackling looming crises from conflicts to climate change, and a nostalgic look back to a former secretary-general who died 50 years ago in the service of peace.