IRIN/Charles Akena
Millions of people depend on forests.

Mr. Ban stressed that governments should build on agreements reached at the United Nations climate change conference in Cancún, Mexico, last year where progress was made on addressing deforestation, climate change adaptation, technology sharing and short- and long-term financing.

“Scores of countries are making impressive progress – from preserving forests to bolstering energy efficiency, from improving disaster preparedness to promoting greener urban planning,” Mr. Ban said, addressing the Leaders’ Dialogue on Climate Change on the eve of the High-level Session of the General Assembly.

“They do this because it is good for their economies and good for the health and well-being of their people. In every case, the key ingredient for success is not money or technology, though clearly these can help. The crucial ingredient is leadership,” said the Secretary-General.

He called for a clear plan on the future of the Kyoto Protocol, an addition to the UN Framework Convention on Climate Change (UNFCCC) that contains legally binding measures to reduce greenhouse gas emissions, and whose first commitment period is due to expire next year.

Mr. Ban pointed out that the current climate change mitigation pledges represented only 60 per cent of what is needed to have a minimum chance of limiting global warming to below 2 degrees Celsius above pre-industrial levels.

“We must do better – and soon. Governments need to dramatically increase their level of ambition. Developed countries must take the lead in this effort, but all countries must do their part,” he said.

“I appeal to you; help us to achieve success in Durban. Use every ounce of your experience, skills, and influence to advance action on climate change. Help us defend the science that shows we are destabilizing our climate and stretching planetary boundaries to a perilous degree,” said the Secretary-General.

“Help us to identify the new alliances – among public officials, business, civil society and faith communities – that will make sustainability the rallying point for action in the 21st century. Together, we can build a low-carbon, more sustainable economy – one that can protect the most vulnerable and result in a cleaner, safer, healthier world for all,” he added. 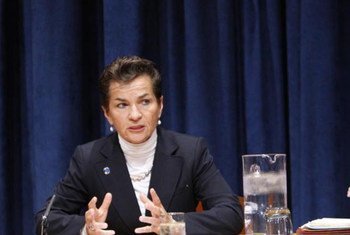 19 September 2011
The top United Nations climate change official today urged governments to carry through their commitments to low-carbon and climate-resilient economies to address climate change, stressing that the forthcoming conference in the South African city of Durban will be an opportunity to take significant steps towards that goal.