Unconfirmed reports indicate that almost 1,000 people have also been wounded during the fighting between the Murle and Lou Nuer communities in Jonglei that followed large-scale cattle raids by members of the two groups which have led to the theft of between 26,000 and 30,000 cattle.

“The Secretary-General calls on the Government of South Sudan to take all steps to restore security in Jonglei state, to protect civilians affected by this violence and to work with both communities to reduce tensions,” a statement issued by his spokesperson said.

The statement added that the UN Mission in South Sudan (UNMISS) stands ready to assist the Government fulfil its primary role to provide security and protect civilians.

An assessment and verification team from UNMISS has already visited the areas where the clashes took place and is working to help local authorities facilitate reconciliation efforts.

Yesterday, the head of UNMISS and the Secretary-General’s Special Representative for South Sudan, Hilde Johnson urged all ethnic communities to exercise restraint.

“This cycle of violence must stop,” she said. “That so many people have been killed and injured again in such wanton destruction is unacceptable.”

UNMISS has been in place since early July, when South Sudan gained its independence from Sudan following a referendum held in January. It took over from the UN Mission in Sudan (UNMIS), which was created following the signing of the 2005 Comprehensive Peace Agreement (CPA) that ended the north-south civil war and paved the way for the referendum. 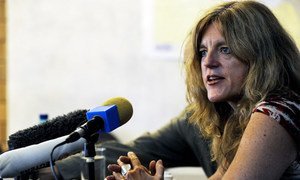 The top United Nations official in South Sudan today called for an end to the “cycle of violence” engulfing the newly independent country’s state of Jonglei, where hundreds of people have been killed in recent days in fighting between ethnic groups.