The Security Council today condemned “in the strongest terms” Friday’s attack on a joint United Nations-African Union force in Darfur (UNAMID) patrol in which one peacekeeper from Sierra Leone was killed and another wounded.

In a press statement the 15-member body called on the Sudanese Government to ensure that the perpetrators are swiftly brought to justice and reiterated its support for the 23,000-strong force, which was set up in 2008 to help end a war between the Government, backed by its militia allies, and various rebel groups. At least 300,000 people have died and 2.7 million others have been driven from their homes since fighting erupted in 2003.

“They (the members) noted that UNAMID is working with Sudanese police to find the perpetrators, encouraged them Government of Sudan to ensure that they are swiftly brought to justice, and stressed that there must be an end to impunity for those that attack peacekeepers,”

Friday’s attack, in which unidentified gunmen ambushed a vehicle carrying five UNAMID troops in the village of Duma, northeast of Nyala, capital of South Darfur state, occurred little more than a month after a UNAMID peacekeeper was shot and killed in West Darfur. Thirty UNAMID personnel have now died from hostile action since the mission took over from an earlier African Union force in Darfur at the start of 2008.

Expressing its condolences to the Sierra Leonean Government, the Council called on all parties in Darfur to cooperate fully with the mission. 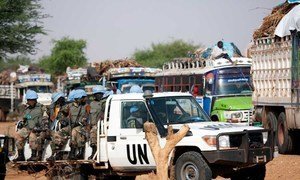 A peacekeeper serving with the joint United Nations-African Union force in Darfur (UNAMID) has been killed and another blue helmet is seriously wounded after an ambush today in the south of the beleaguered Sudanese region.