8 August 2011
Secretary-General Ban Ki-moon brought a message of international solidarity to parts of eastern Japan still reeling from the 'triple disasters' triggered by the tsunami, earthquake and nuclear accident that struck earlier this year.

Secretary-General Ban Ki-moon brought a message of international solidarity to parts of eastern Japan still reeling from the effects of the 'triple disasters' triggered by the tsunami, earthquake and nuclear accident that struck earlier this year.

Evacuees in Fukushima told Mr. Ban they wanted to prevent others from experiencing the suffering they had endured.

“I was able to read from their faces that they were really asking the Government and the United Nations that this kind of accident which happened in Fukushima Daiichi nuclear power plant should never happen again in other parts of the world,” he told reporters gathered in Soma City.

Meeting with more than a dozen displaced families, the Secretary-General, speaking Japanese, expressed his sympathy, his hopes for an early recovery and his conviction that Japan will rise to the challenges ahead.

Mr. Ban later met with a group of students at Fukushima Minami High School, urging them to combine their strengths to help Japan to recover. “The United Nations and the world are behind you.”

While acknowledging that he could not immediately respond to all of the students' concerns, the Secretary-General pledged to put nuclear safety and security high on the international agenda.

“I can tell you that I take the issue of nuclear safety and security very seriously.”

Mr. Ban has commissioned a report by experts from across the United Nations system on the implications of the Fukushima disaster.

He will also convene a high-level meeting bringing together officials from around the world in September to discuss the report and international cooperation on nuclear safety and security.

The students voiced appreciation for these initiatives and stressed their determination to help Japan recover.

Throughout his visit, Mr. Ban repeatedly offered what the Japanese term “kizuna,” or ties of friendship. “This means our strong bond with our family and friends. Our common humanity, beyond politics or nationality,” he told the students.

The Secretary-General observed that because of the suffering that the students had endured they could “understand devastation and loss all too well.” With that understanding, he added, “you can do so much to help your community and our world.”

Mr. Ban paid his respects to the memory of the deceased in Soma City against the backdrop of the still-devastated area.

“This is a moment for common humanity, beyond all politics or nationalities,” he said.

“While I was struck and saddened by the level of destruction by these triple crises I was also encouraged by what I have seen. I have seen such as strong will and unbreakable spirit and determination and resilience of the Japanese people and I am sure that Japan will be able to overcome this very soon,” he told reporters after a meeting with Prime Minister Naoto Kan.

Mr. Ban said he welcomed Mr. Kan's assurance that “the Japanese Government will share its invaluable experience and lessons learned from this tragedy with the international community, particularly in the area of disaster risk reduction and preparedness and also strengthening nuclear safety standards.”

The Secretary-General's visit coincided with the sixty-sixth anniversary of the atomic attacks on Japan, and he took the occasion to reconfirm his “unwavering commitment to ridding the world of all nuclear weapons.”

At a press stakeout with the Foreign Minister Mr. Ban, who last year attended the Hiroshima Peace Memorial Ceremony, thanked Japan for its constructive engagement with the nuclear-weapon States and pledged to continue working to free the world of the nuclear threat. 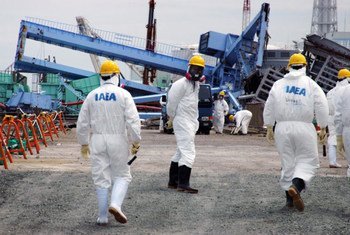 2 August 2011
Secretary-General Ban Ki-moon will depart on Saturday for a trip that will take him to Japan, where he will visit Fukushima to see first-hand the devastation caused by the earthquake and tsunami that struck earlier this year, and to the Republic of Korea.