The United Nations refugee agency today airlifted the first of three consignments of emergency relief supplies for famine-stricken people in Somalia’s capital, Mogadishu, the first time the agency has delivered aid to the city by air in five years.

The UN High Commissioner for Refugees (UNHCR) said the chartered cargo plane that landed in Mogadishu today was carrying more than 31 tons of shelter material and other relief items from the agency’s emergency stocks in Dubai.

The consignment comprises some 2,500 emergency assistance packages (EAPs), which include plastic sheeting for shelter, sleeping mats and blankets, jerry cans for water storage, as well as kitchen utensils. The second flight is due in Mogadishu on Thursday and a third one next week.

UNHCR has been shipping relief supplies to Mogadishu by sea and land, but due to the large number of people seeking help in the city after fleeing their famine-hit villages in Somali’s southern region, the agency decided to airlift supplies to save time.

An estimated 100,000 Somalis have gone to Mogadishu over the past two months in search of food, water, shelter and other forms of humanitarian assistance. There were already over 370,000 internally displaced persons (IDPs) in Mogadishu before the latest influx.

Mogadishu is one of five areas of southern Somalia which the UN has declared to be struck by famine.

“This airlift of emergency assistance items will allow us to continue delivering aid to those displaced by drought and famine,” said Bruno Geddo, UNHCR’s representative in Somalia.

“However, we need the funding support to continue to enable us to replenish our emergency stocks inside Somalia as they are being rapidly depleted as we deliver much-needed aid across southern Somalia,” he added.

UNHCR has appealed for $145 million to fund humanitarian operations for refugees and IDPs suffering from the effects of the severe drought in the Horn of Africa until the end of this year. The agency has to date received contributions and pledges worth $65 million. That amount covers less than 45 per cent of identified needs in Somalia, Kenya, Ethiopia and Djibouti.

The agency is urging donors, including the private sector and individuals, to show greater generosity to bridge the funding gap. 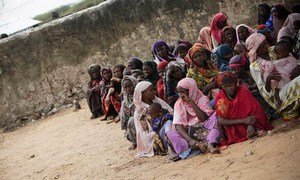 As more and more Somalis, the majority of them women and children, continue to flee the famine in their homeland, United Nations agencies are ramping up efforts to meet the rising humanitarian needs, especially nutrition for the youngest among them.