Secretary-General Ban Ki-moon today appealed to the international community to support the efforts of his special envoy tasked with helping to resolve the crisis in Libya to have both parties engage in direct talks.

“Finding a political solution to the crisis in Libya remains our top priority, and our efforts have intensified,” Mr. Ban said in a message sent to the meeting of the International Contact Group on Libya that was held today in the Turkish city of Istanbul.

He said his Special Envoy to Libya, Abdul Elah al-Khatib, continues to lead efforts to get the parties to work for a political solution that would bring an end to the hostilities.

“I appeal to the international community to support the Special Envoy and send a unified message to both parties urging them to engage in direct negotiations, through my ‘good offices’ to break the current impasse,” he added.

The Secretary-General said that since the Contact Group’s last meeting in Abu Dhabi on 9 June, Libyans had faced severe shortages of food, medical supplies and fuel, as well as the lack of access to water.

“This is of serious concern, considering the approach of the Holy month of Ramadan. I hope that the international community will step in and provide urgent humanitarian aid. I urge the Libyan parties to allow unhindered access for the delivery of humanitarian assistance,” Mr. Ban said.

The UN continues to plan for peacebuilding and post-conflict reconstruction in Libya, he said, adding that his Special Adviser, Ian Martin, is coordinating the planning.

“I urge the international community to remain united in vision and purpose, to bring about a lasting solution to the Libyan crisis that addresses the aspirations of the Libyan people,” he added.

At its meeting today, the Contact Group reaffirmed the leading role of the UN in facilitating dialogue in Libya and supporting an inclusive political transition process through the “good offices” of the Secretary-General and his Special Envoy.

The Contact Group welcomed the efforts of Mr. al-Khatib and urged all those involved in the process to find a solution to the Libyan conflict to cooperate and coordinate their efforts with him, according to a statement by the Chairman. It also stressed the need for a genuine ceasefire and civilian access to humanitarian services.

The participants reiterated that successful implementation of a ceasefire would require, among others, the immediate withdrawal of the forces of Muammar al-Qadhafi in Tripoli to bases, the release of all those detained or kidnapped by the regime, the opening of all borders to ensure fast and unimpeded passage of humanitarian aid and the provision of water and electricity to all cities and regions “to help normalize life.”

In addition, the Group reaffirmed that the Qadhafi regime no longer has any legitimate authority in Libya and that he and certain members of his family “must go.” Participants also agreed to deal with the National Transitional Council (NTC) – the group representing the opposition – as the legitimate governing authority in Libya.

Libya has been engulfed by fighting since a pro-democracy movement opposed to the Qadhafi regime emerged in February following similar protests in Tunisia, Egypt and other countries across North Africa and the Middle East. 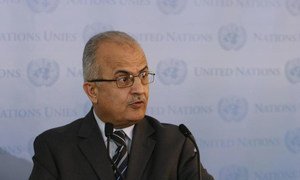 With the conflict in Libya entering its fifth month and showing no signs of waning, it is critical for the parties to redouble efforts towards a political solution as well as to alleviate the suffering caused to the people of the North African nation, a senior United Nations official stressed today.