The United Nations Mission in Sudan (UNMIS) is sending an additional company of troops to the disputed Abyei region, reinforcing the four companies already there, following renewed clashes between forces linked to northern and southern Sudan.

The increased deployment of peacekeepers will allow for more frequent patrols throughout the region straddling northern and southern Sudan, providing a continuous rolling presence, as well as for foot patrols within Abyei town itself, the UN Department of Peacekeeping Operations (DPKO) said today.

Abyei was due to have voted in a separate referendum on whether to join northern or southern Sudan in January, when the South opted for secession, but failure to establish a referendum commission and lack of agreement on who could vote prevented a ballot. The two sides have pledged to solve the issue by the end of March.

The Security Council was briefed today by Assistant Secretary-General for Peacekeeping Atul Khare on the latest clashes in which, according to media reports, at least 10 people were killed when militia attacked a police post, with a top government official saying the attackers were backed by the northern Sudanese government, while tribesmen involved in the attack said it was provoked by the southern government.

In a press statement, the Council voiced deep concern, condemned the use of violence and called on all parties to reduce tensions by implementing previous agreements and resolve the status issue.

The 15-member body also urged the parties to cooperate with UNMIS in resolving their differences. 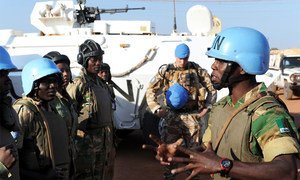 A senior United Nations official today deplored renewed clashes in Sudan’s contested Abyei region, whose status North and South Sudan have pledged to solve by the end of March.