In Haiti, a girl receives fluids intravenously to treat the dangerous levels of dehydration that accompany cholera
15 November 2010

As data collection improves in communities affected by the cholera outbreak in Haiti, the number of reported cases is expected to rise significantly, the top United Nations relief official there said today.

Over 12,000 Haitians have so far been hospitalized and over 800 people have died from the disease, which is spread by contaminated food and water.

“We are now trying to ramp up the collection of data from communities, so that we can get a more realistic figure,” said Nigel Fisher, who is acting UN Humanitarian Coordinator and deputy head of the UN mission in Haiti, known as MINUSTAH.

“We expect a significant increase in recorded cases. People should not be surprised by that.”

Speaking to reporters in New York via video link from the Haitian capital, Port-au-Prince, Mr. Fisher said current data was based on the Ministry of Health statistics derived from the number of patients hospitalized with cholera.

Up to 200,000 cases of cholera are expected to be reported over the next 6 to 12 months, as Haiti also deals with the aftermath of January’s devastating earthquake and flooding in the wake of a recent hurricane.

Mr. Fisher confirmed that cases of the disease continued to expand rapidly, with cases reaching every department, or administrative division, as well as the capital.

“This has gone far beyond a health or sanitation matter. It’s an issue of environmental concern, it’s an issue obviously of national security where we have demonstrations starting already, against for example cholera treatment centres,” Mr. Fisher said.

With treatment centres facing demonstrations and a large, violent protest targeting MINUSTAH headquarters at Cap Haïtien today, communications between the UN and the population have been expanded to meet a growing need.

“The communications strategy is broadening, not just with information about how people can protect themselves through better hygiene but also examples as to how a cholera treatment centre in your locality is actually an advantage and is not a threat to your health,” he said.

Some Haitians have grown suspicious of UN facilities in the area after a rumour began that a peacekeepers’ camp was the source of the original outbreak. Mr. Fisher responded to questions on the subject saying that no link had been found between the camp and the outbreak. He said the United States Centers for Disease Control (CDC) had analyzed the strain of cholera but had been unable to place a definite source on the outbreak.

“The conclusion was that it would be impossible to ascertain where and how it came in,” he said.

“The reports of CDC and other tests have been negative so far. CDC has said it would be almost impossible to find a precise source.”

He added that the UN’s priority is on preventing the further spread of the disease. “Our emphasis today is on trying to contain the number of deaths from what is going to be a very severe outbreak,” he told reporters.

To help contain the outbreak, nearly half a million water tablets, soap and oral rehydration salts are being distributed, targeting areas where cholera has already been detected.

A $164 million appeal was launched on Friday to get additional doctors, medicines and water purification equipment to respond to the epidemic, which has spread quickly since it was first confirmed on 22 October.

♦ Receive daily updates directly in your inbox - Subscribe here to a topic.
♦ Download the UN News app for your iOS or Android devices.
Haiti|Cholera 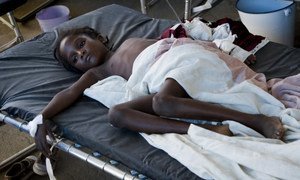 Timely response by the Government of Haiti and humanitarian agencies to the cholera outbreak in the country saved lives, with more than 11,000 patients having been treated in hospitals since cases were first reported last month, the United Nations said today.