Morocco’s tolerance of Jews and its resistance to anti-Semitic policies during World War II were spotlighted today as part of a series of events being held at the United Nations to commemorate victims of the Holocaust.

The North African nation resisted French colonial policies during World War II, refusing to exclude Jews from public functions and not making them wear the yellow Star of David, as had been decreed by the Vichy regime in German-occupied France.

Efforts to whitewash the Holocaust are “a wound to the collective memory, which we know is engraved in one of the most painful chapters in the collective history of mankind,” King Mohammed VI said in a message to a briefing today at UN Headquarters in New York, delivered on his behalf by Peter Geffen, an educator.

Morocco’s experience with Jews provides important lessons for the present, especially the conflict in the Middle East, the King stressed. Exclusion, he said, still exists even when steps are made to spur dialogue among the world’s civilizations, cultures and religions.

Remembering the Holocaust “strongly imposes ethical, moral and political standards which will, tomorrow, be the true guarantors of this peace – based on equally-shared justice and dignity – and for which most Palestinians and Israelis yearn,” he underscored.

Serge Berdugo, Ambassador at Large for Morocco, recounted a story at the event of his father, a leader of a Jewish community in the country during World War II, who received the solemn vow of the country’s monarch that no harm would come to Jews which did not “affect first my family and myself.”

The king at the time did his utmost to slow down the record-taking demanded by French authorities of the assets held by Jews, and called for the destruction of all documents when the United States landed on Moroccan shores in November 1942.

Also addressing today’s briefing – which was organized by the Non-Governmental Organizations (NGO) Relations Cluster in the UN’s Department of Public Information (DPI) – was Andre Azoulay, Counsellor to the King.

Estimates vary but about 6 million Jews are thought to have been killed in the genocide perpetrated by the Nazis, as well as countless numbers of Roma, Slavs, homosexuals, disabled people, Jehovah’s Witnesses, Communists and political dissidents.

The legacy of the Holocaust’s survivors “carry a crucial message for all of us,” Secretary-General Ban Ki-moon said yesterday in a video message commemorating the International Day in Memory of the Victims of the Holocaust.

“A message about the triumph of the human spirit. A living testament that tyranny, though it may rise, will surely not prevail,” he said.

The UN has observed the Day on 27 January since the General Assembly made the designation in 2005. Yesterday marked the 65th anniversary to the day of the liberation of the Auschwitz-Birkenau, the largest and most notorious of all of the camps.

The UN has marked this year’s Day through exhibits, panel discussions and a film screening.

Hundreds of people attended a memorial ceremony and concert at the General Assembly Hall in New York last night, with the Nürnberg Philharmonic Orchestra, the Bayreuth Zamir Choir and the Jerusalem Oratorio Chamber Choir, under the baton of Maestro Isaak Tavior, performing a range of works, including pieces by Beethoven and Brahms. The event was sponsored by the Permanent Mission of Germany.

Holocaust remembrance events are also being held this week by the UN at its offices in Geneva and Vienna and across its global network of information centres, including in Bucharest and Bogotá. For the first time, observances were held in Myanmar and Namibia. 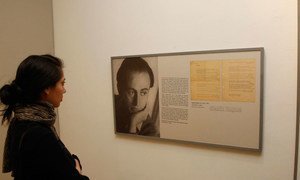 In music and in words, UN gives voice to the legacy of Holocaust survivors

With the help of stirring music from a German-Israeli chorus and solemn speeches, the United Nations tonight paid tribute to the victims of the Holocaust and spotlighted the legacy of the survivors of the Nazi death camps in World War II.