Secretary-General Ban Ki-moon is calling for a six-month extension for the 35-year-old United Nations mission observing the ceasefire between Israel and Syria on the Golan Heights, terming its presence “essential” due to overlying regional tensions despite calm on that particular front.

“The situation in the Israel-Syria sector has remained generally quiet,” he says in his latest report to the Security Council on the UN Disengagement Observer Force (UNDOF) established in May 1974 following the agreed disengagement of Israeli and Syrian forces after the 1973 war.

“Nevertheless, the situation in the Middle East is tense and is likely to remain so, unless and until a comprehensive settlement covering all aspects of the Middle East problem can be reached… Under the prevailing circumstances, I consider the continued presence of UNDOF in the area to be essential,” he adds, calling on the Council to extend its mandate, most recently renewed in June, until 30 June 2010.

He notes that both Syria and Israel have agreed to the proposed extension and warns that the $45 million in funding for the 1,040-strong force approved by the General Assembly for the period from 1 July 2009 to 30 June 2010 faces a shortfall of $19.9 million as of 30 September. “The outstanding contributions impede the ability of the Secretariat to support the operations of the Force and to reimburse Member States contributing troops to the Force,” he writes.

Mr. Ban calls on Israel and Syria to resume the indirect peace talks, initiated under the auspices of Turkey, aimed at a comprehensive peace, noting that during the reporting period of the last six months, as in the past, both sides denied inspection teams access to some of their positions and imposed restrictions on the Force’s freedom of movement.

“Both sides continued to construct new and renovate existing defensive positions in the respective areas of limitation,” he adds, also warning of an increased threat to UNDOF personnel and local inhabitants in the area from long-planted mines with deteriorating detonation systems. 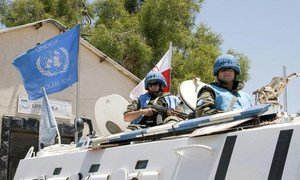 The Security Council today extended for another six months the mandate of the United Nations force in the Golan Heights that has been tasked with supervising the disengagement accord between Syrian and Israeli forces after their 1973 war.