As the General Assembly wrapped up the fourth day of its annual high-level debate, Prime Minister Ayad Allawi of Iraq appealed to its neighbours and the international community for help in rebuilding the country ruined by war and a brutal regime and defeating terrorists bent on destroying the dreams of the Iraqi people for a country rooted in democracy.

Iraq was now a country that respected laws, human rights and freedoms, Mr. Allawi said, and the new Government gave its people their due respect within a framework shaped by democratic freedoms. He said that elections to be held next January were vital to improving the country's security situation and that his Government was committed to adhering to the deadline despite the obvious complexities. He expressed gratitude to the United Nations for its assistance in preparing for the elections, and said he looked forward to the return of all UN agencies in the future.
Mr. Allawi underscored that the most important priority was to defeat the terrorists and extremists who were still trying to target the dream of the Iraqi people for peace as well as destroy its civilization and culture, and to bring them to justice. Equally vital was restoring economic progress and the rule of law in the country. "We need more assistance from our neighbours and the international community as whole to meet our objectives and the needs of the Iraqi people," he urged.
[At a meeting later Friday with Secretary-General Kofi Annan, Mr. Allawi expressed the importance of the UN role in supporting the elections in Iraq.
The Secretary-General assured the Prime Minister that the UN would give all possible support in advising and assisting the country’s Independent Electoral Commission. A UN team already was in Baghdad and additional personnel would be sent as circumstances permitted.] 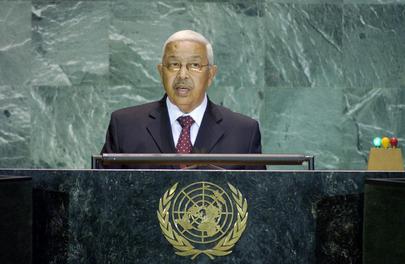 Speaking at the outset of the Assembly's afternoon session, President Pedro Verona Rodrigues Pires of Cape Verde said the economic and developmental problems confronting small island States such as his were unique problems and, as such, called for similarly unique attention. He appealed for the support of the international community if success was to be assured.
He said nations, especially small developing nations, while making concerted efforts to improve their conditions, were still confronted with the problem of hunger and poverty. Success in the war against hunger and poverty, he asserted, would have a positive effect in those countries, as well as for an improvement in the human condition in the world, as whole. He also called for a united front against HIV/AIDS and other pandemic illnesses. 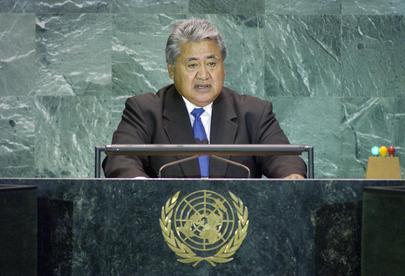 Prime Minister Tuila'epa Sailele Malielegaoi of Samoa noted that at the annual Pacific Islands Forum Summit hosted last month by his country, Pacific leaders had addressed the dangers posed to their region by terrorism, transnational crime, illicit drugs and the spread of small arms. He said the Forum was committed to collective mechanisms to help regional governments recover from national conflicts and crises. The success of those arrangements was already evident in the Solomon Islands as well as in Bougainville, where elections for an autonomous government were scheduled for the end of the year.
Mr. Malielegaoi said Samoa also called on the United Nations system and the international community to provide the necessary support for the development programmes of small island developing States. Furthermore, talks at the World Trade Organization (WTO) should take into full account the vulnerabilities of small island developing States with regard to special treatment for small economies. 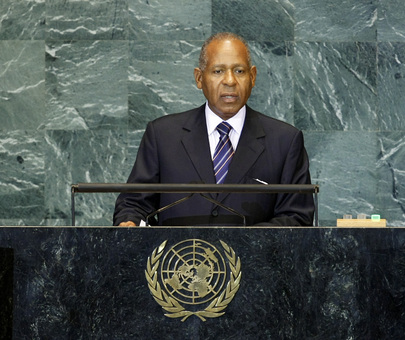 Patrick Manning, the Prime Minister of Trinidad and Tobago, voiced his solidarity with other small island nations in calling for multilateral trading arrangements that take into account the vulnerabilities of such countries. "It is through softer trading arrangements, increased financial flows and the consequent empowerment of our citizens that we will be able to realize the most central of all the Millennium Development Goals (MDGs), the eradication of poverty," he said.
On the environmental vulnerabilities of the countries of the Caribbean, particularly in the aftermath of the busy hurricane season, Mr. Manning said the January meeting in Mauritius to review the Barbados Plan of Action "must seek to comprehensively address the new and emerging threats to the sustainable development of small island developing States." 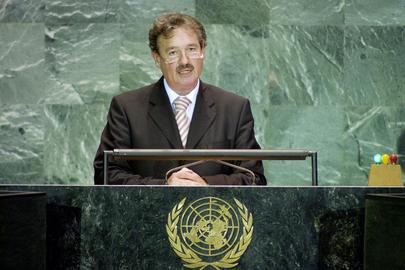 Foreign Minister Jean Asselborn of Luxembourg called for stepped-up international efforts to promote development - noting that the inhabitants of many developing countries, especially in Africa, remain mired in poverty, hunger and disease. Official development assistance should be increased, he said, but it was also important to encourage all countries to abide by the rule of law and practice good governance. 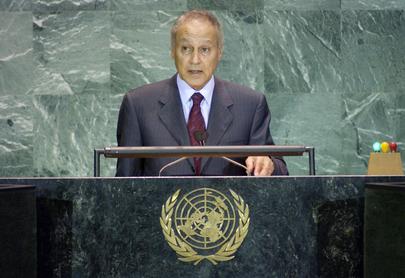 Egypt's Foreign Minister Ahmed Aboul Gheit said the scourge of terrorism will only be eradicated when there is an equitable international economic and social system, and that will only happen when the ambitious aims and programmes of action mapped out at UN conferences over the past decade are translated into practical actions. He noted the "agonizingly slow progress" towards achieving the MDGs and said it will hurt hopes for a more stable globe. 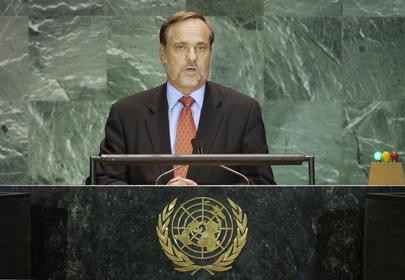 Norwegian Foreign Minister Jan Petersen told the Assembly that "the resolution of armed conflicts is not solely the province of the UN." He said regional organizations should have a greater role because they frequently have better local knowledge, citing the part played by the African Union (AU) in the current Darfur crisis in Sudan. But he added that there are few institutional mechanisms in place to allow the UN and regional groups to work as effective partners. 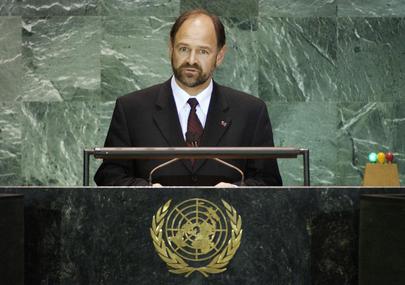 Foreign Minister Ernst Walch of Liechtenstein said the world is witnessing "a dangerous erosion in the application of international law standards," especially in the fields of human rights and humanitarian issues. Dr. Walch called for the primacy of the rule of law to be upheld domestically and internationally so that the standards can be maintained. He also supported the push for reform of the Security Council, stressing it needs to be more representative and more accountable. 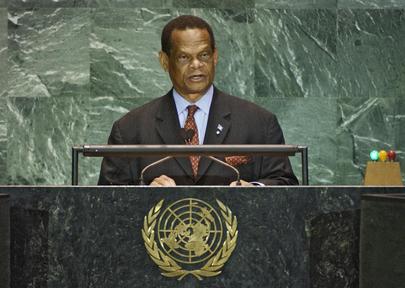 Julian Hunte, Foreign Minister for St. Lucia, said the recent devastating impact of hurricanes and tropical storms on Grenada, Jamaica and Haiti spotlighted the vulnerability of small island developing States. Their threats do not only come from nature, he said, but also from inequalities and inconsistencies in the global trading system. "Agricultural subsidies, market access, non-tariff barriers to trade, low or falling commodity prices, and special and differential treatment - all these issues beg for constructive dialogue and decisive action," he said. 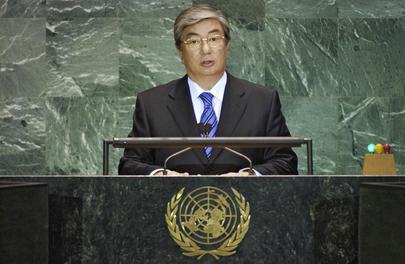 Kazakhstan's Foreign Minister Kassymzhomart Tokaev said Central Asia's wellbeing depended mainly on the stabilization and economic development of Afghanistan. But he was concerned that the illicit drug trade, religious extremism, poverty and illegal migration had turned it into a breeding ground for terrorism. Mr. Tokaev offered his support for the Afghan Government's efforts to achieve peace, security and humanitarian relief. 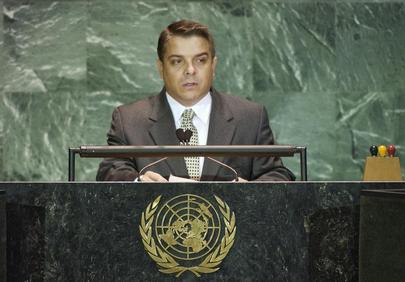 Foreign Minister Felipe Pérez Roque of Cuba said the 130 or so least developed nations must build a common front to defend their interests and their right to development because the "modest objectives" of the Millennium Summit in 2000 would not be achieved. He said the General Assembly was being ignored and the Security Council pursued the agenda of a narrow group of nations and had to be expanded to include developing countries. 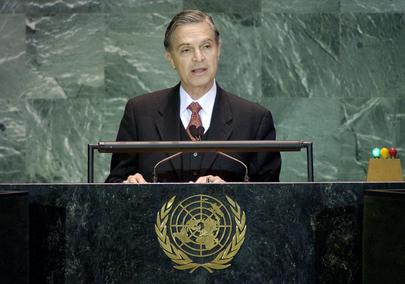 Luis Ernesto Derbez, Foreign Minister of Mexico, told the Assembly that the decade-long push to reform the Security Council had failed because it focused too much on the number of seats, how they should be allocated and whether they should have permanent status. "The fundamental questions that have largely been ignored are what kind of collective security system is needed by today's international community, and what mechanisms should be used in order to face the new challenges and to prevent conflict," he said. 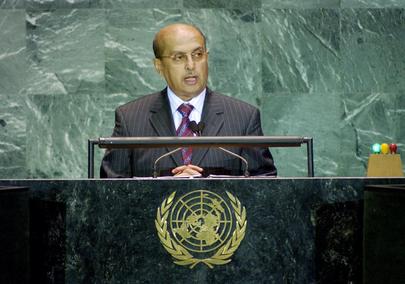 Yemeni Foreign Minister Abubakr Al-Qirbi said he was convinced that "terrorism has no specific identity or particular religion," and therefore struggles for national liberation or for ending foreign occupation were legitimate under the UN Charter. He said the correct approach for combating terrorism was to deploy all possible resources to the task, and this ranged from better security and intelligence work to spurring greater justice and economic development. 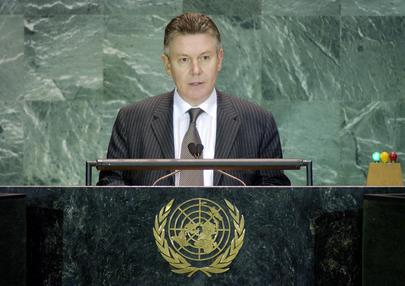 Emphasizing the importance of multilateralism, Belgium's Foreign Minister Karel De Gucht said the UN's credibility will depend on its efficiency and results, and therefore it was essential to stand together to reinforce the UN system and the values it serves. Mr. De Gucht said his country was especially committed to bringing peace and stability to the Great Lakes region of Africa, including the Democratic Republic of the Congo (DRC), Rwanda and Burundi. 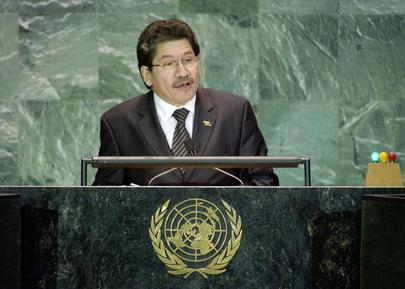 Venezuelan Foreign Minister Jesús Arnaldo Pérez said neo-liberalism had been an economic failure in Latin America, condemning millions of people to a life below the poverty line and feeding their doubts about the worth of democracy. He said the best method of reducing hunger was to improve democracy - by giving a greater voice to the power and by stretching the notion of democracy beyond mere politics and into the economic and social aspects of life as well. 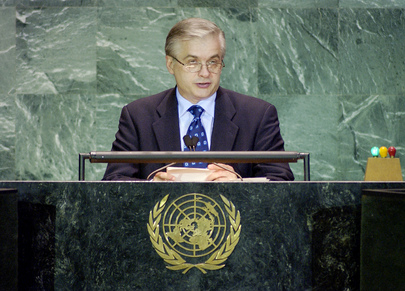 Wlodzimierz Cimoszewicz, Foreign Minister of Poland, told the Assembly that debate about reform of the Security Council should not centre on the number of members. "A Council of 24 States will probably not have a more powerful voice than that of 15," he said, adding it is more important to make sure that the Council - and the rest of the UN system - has the resources and the capacity to implement what is in its mandates. 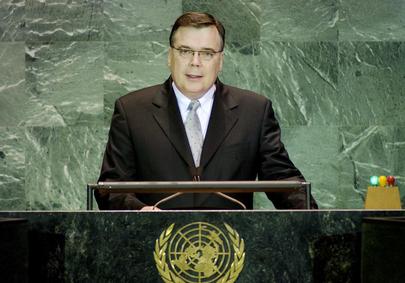 Geir Haarde, Finance Minister and Acting Foreign Minister of Iceland, said the Security Council must be more representative of current global concerns, particularly the spectre of terrorism, and made more efficient and effective. It was time that certain countries that had made considerable contributions to the work of the United Nations be given permanent seats on the Security Council. It was also important to ensure that the Council and the multilateral system overall understood and took into account the issues of smaller States, he said, noting that the Nordic States in the Western European and Other States Group - Denmark, Finland, Norway and Sweden - had endorsed Iceland's candidacy for a non-permanent seat on the Council in 2009 and 2010. 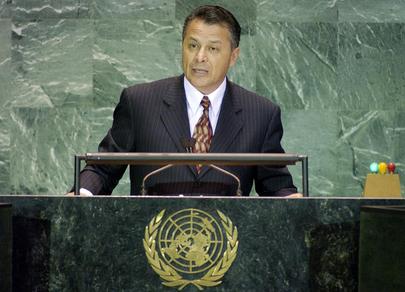 Foreign Minster Patricio Zuqilanda of Ecuador said it was time for the international community and the United Nations to give absolute priority and determined political will to tackle the question of civilians in armed conflict. It was up to the Security Council to act resolutely in such "bloody and inhuman" situations, where the rule of international humanitarian law had vanished. That 15-nation body must reinforce the protection of civilians in armed conflict in order to prevent the failure of the entire international juridical structure. 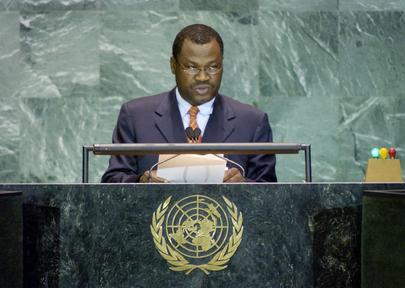 João Bernardo de Miranda, Foreign Minister of Angola, voiced concern at the instability in the Democratic Republic of the Congo, which shared a long border with his country. Despite progress towards peace, the situation was still fragile, and the international community – particularly the UN Security Council and the African Union – must continue to devote attention to it in order to avoid a collapse of the process. He called on sub-regional organizations, the countries in the region and other parties to work and encourage the Congolese to meet their commitments under the country’s transition period.