The top United Nations envoy in Iraq, Sergio Vieira de Mello, was killed today when terrorists blew up the UN headquarters in Baghdad, killing at least 14 others and injuring dozens more in what Secretary-General Kofi Annan denounced as an inexcusable "act of unprovoked and murderous violence."

Mr. Annan immediately cancelled his holiday in Europe to return to UN Headquarters in New York, where he is expected to arrive tomorrow, and the Security Council held emergency consultations, condemning in the strongest terms the "terrorist criminal attack" and vowing to further intensify its efforts to help the people of Iraq.

Mr. Vieira de Mello, a 30-year Brazilian veteran of many UN peacekeeping operations from the Balkans to East Timor to Africa, had been trapped in the rubble of the devastated Canal Hotel, which served as UN headquarters in the Iraqi capital. He was 55 and was UN High Commissioner for Human Rights.

'A bitter blow for the United Nations'

Mr. Annan mourned his death as "a bitter blow for the United Nations, and for me personally."

"Those who killed him have committed a crime, not only against the United Nations but against Iraq itself," he said in a statement issued in New York. "The death of any colleague is hard to bear, but I can think of no one we could less afford to spare, or who would be more acutely missed throughout the UN system, than Sergio."

Among others killed were Rick Hooper of the United States, Ranillo Buenaventura of the Philippines, Jean-Selim Kanaan of Egypt and Fiona Watson of the United Kingdom. In addition, the Programme Coordinator for the UN Children’s Fund (UNICEF) in Iraq, Christopher Klein-Beekman, also died. He was a 32-year-old Canadian who was the agency’s Officer-in-Charge in the country at the time of his death. “The people of Iraq have suffered an enormous loss today,” UNICEF Executive Director Carol Bellamy said.

Mr. Vieira de Mello made the establishment of full human rights a major part of his mission to Iraq ever since he arrived at the beginning of June as Mr. Annan's Special Representative and insisted that full sovereignty should be restored to the Iraqi people as soon as possible following the occupation of the country by the United States-led coalition.

As news of his death spread through UN Headquarters in New York and the flags of the 191 Member States were lowered in front of the building - leaving the UN flag alone at half mast - staff gathered in small sombre groups to mourn.

Mr. Vieira de Mello only took his Iraqi mission as a short-term four-month assignment, so important did he and the Secretary-General consider the global fight for human rights and the urgency of his return to his post as High Commissioner.

He had a long and distinguished UN career stretching over 30 years. Before being appointed to the human rights post in 2002, he was the UN Transitional Administrator in East Timor and prior to that briefly held the position of Special Representative for Kosovo. He had extensive Headquarters and field experience in humanitarian and peacekeeping operations, including in Bangladesh, Sudan, Cyprus, Mozambique, Peru and Lebanon.

UN spokesman Fred Eckhard told a briefing at UN Headquarters that as of mid-afternoon New York time, some six hours after the attack occurred, 15 people had so far been reported killed and that the toll could rise since many of the 100 injured, including both Iraqis and international staff, were in serious condition.

Rescuers from the United States forces had worked to extricate Mr. Vieira de Mello from the ruined building, which served as a base for some 300 international UN personnel in Baghdad out of the 646 in Iraq altogether.

"Nothing can excuse this act of unprovoked and murderous violence against men and women who went to Iraq for one purpose only: to help the Iraqi people recover their independence and sovereignty, and to rebuild their country as fast as possible, under leaders of their own choosing," Mr. Annan said in a statement earlier Tuesday before Mr. Vieira de Mello's death was announced.

"I also hope to see those who have perpetrated this outrage brought to justice," he added. "Most of all, I hope to see Iraq restored as soon as possible to peace, security and full independence. The United Nations will make every effort to bring that about."

After a briefing from Assistant Secretary-General for Political Affairs Danilo Türk, the Security Council said in a press statement, before news that Mr. Vieira de Mello had succumbed: "Such terrorist incidents cannot break the will of the international community to further intensify its efforts to help the people of Iraq."

Council members reaffirmed that "this horrible attack that aimed at undermining the vital role of the United Nations in Iraq will not affect their determination and [they] will stay united against such attacks and to help the Iraqi people restore peace and stability to their country.

A mission of peace

"The United Nations is in Iraq on a mission of peace, and for the reconstruction of the country and to support the Iraqi people. Therefore it is all the more shocking that this attack occurred," the statement concluded.

The Acting High Commissioner for Human Rights, Bertrand Ramcharan, standing in for Mr. Vieira de Mello during his tour of duty in Iraq, expressed deep shock and outrage over the "despicable act" against those whose only aim is to help the Iraqi people.

"We are deeply shocked and outraged at the explosion at United Nations headquarters in Baghdad," Mr. Ramcharan said in a statement. "Such a despicable act directed at people whose only aim is to assist the people of Iraq recover from war and years of oppression is to be is to be condemned by the whole international community," he added.

UN High Commissioner for Refugees Ruud Lubbers denounced the bombing as an act of senseless violence.

"We are shocked and outraged by the attack, which ultimately is aimed at the Iraqi people that the United Nations is trying to help," he said. "This senseless attack is a setback to the UN's humanitarian efforts to aid Iraqis who have been through decades of suffering." 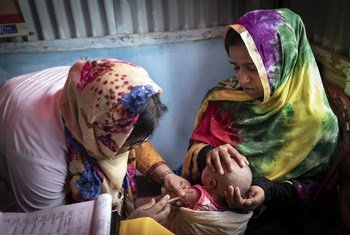 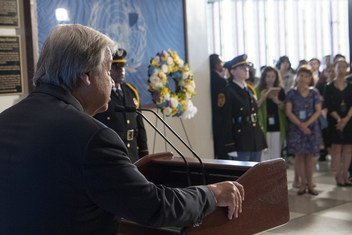