©UNICEF/Brown
A volunteer at the Primary Health Centre in on of Cox's Bazaar's vast refugee camps inoculates the baby of an 18-year-old mother, Bangladesh 2019.
19 August 2019
Humanitarian Aid

Marking the official day’s tenth anniversary on Monday, the UN is honouring the contribution of tens of thousands of women humanitarian aid workers who provide life-saving support to vulnerable people caught up in crises in some of the world’s most dangerous places.

The day is commemorated each year on 19 August, the date back in 2003 when the UN headquarters in Baghdad was targeted by a large terrorist truck bomb, killing 22 people, including Sergio Vieira de Mello, the UN’s top representative in Iraq.

19 August is the 🔟th anniversary of World Humanitarian Day.

To mark the day, hour by hour, we will be sharing 24 stories of incredible #WomenHumanitarians working to make a difference in the 🌍.

This year’s focus salutes the efforts of women humanitarian workers across the world who rally to people in need and are often the first to respond and the last to leave.

“From supporting civilians caught up in crisis to addressing disease outbreaks, women humanitarians are on the front lines”, said Secretary-General António Guterres.

These unsung heroes have long been working in their own communities in some of the most difficult terrains – from the war-wounded in Afghanistan, to the food insecure in the Sahel, to those who have lost their homes and livelihoods in places such as Central African Republic, South Sudan, Syria and Yemen.

“Their presence makes aid operations more effective by increasing their reach”, said the UN chief. “It also improves the humanitarian response to gender-based violence, which increases during emergencies”.

Across the globe, 250,000 aid workers are women – a figure that amounts to more than 40 per cent of the humanitarian workforce. But aid work is becoming increasingly dangerous.

Listen to or download an interview with Melissa Fleming, currently the communications chief for refugee agency UNHCR, and Adiba Qasim, Yazidi survivor and refugee:

Since August 2003, more than 4,500 aid workers of all genders have been killed, injured, detained, assaulted or kidnapped while carrying out their work. That averages out to five attacks per week.

Moreover, women humanitarians are at particularly high risk of robbery, sexual assault and other violence.

The UN emphasizes that under international law, all humanitarian workers must be safeguarded.

“World leaders, and all parties to conflict, must ensure that humanitarians are protected from harm, as required under international law”, Mr. Guterres stressed.

And yet, serious violations of international humanitarian and human rights law continue around the world, which “must be investigated and prosecuted” always, he added.

As part of this year’s WHD commemorations, the UN and partners are launching the #WomenHumanitarians global campaign to pay special tribute to and raise support for the work women do to save lives and alleviate human suffering.

The campaign tells the stories of 24 women over 24 hours, to show the range and diversity of their roles in humanitarian action. They include a driver in the Central African Republic who brings food to people in need; a woman who provides legal advice to refugee women and children from Somalia; and a midwife in Liberia who has cared for mothers and babies for three decades and has more than 800 girls named after her.

“This World Humanitarian Day, we showcase the commitment and drive of some truly amazing women in the humanitarian community”, said UN humanitarian chief and Emergency Relief Coordinator Mark Lowcock.  “The dedication of these women to help the world’s most vulnerable people is admirable, particularly those women who are often the first to respond in their communities when faced with a crisis,”

Today, and for the rest of this month, Mr. Guterres invites everyone to share through their online and social media platforms their own “powerful stories” of humanitarian aid workers to “reaffirm our common commitment to strengthening the role of women in humanitarian operations”.

“On World Humanitarian Day and every day, we stand up for humanitarian workers around the world”, concluded the Secretary-General.

The attack sixteen years ago on UN Headquarters in Iraq was one of the most lethal in the Organization's history, and marked a turning point in how the UN and aid groups operate in the field. Here are hear first-hand accounts from some of the survivors.

At a wreath-laying ceremony at UN Headquarters in New York on Monday, which observed a minute of silence in honour of those who died in the Canal Hotel bombing in Baghdad, and “so many others who have perished in the line of duty”, Deputy Secretary-General Amina Mohammed said that these losses “have seared our awareness as members of a close-knit” UN family, and also  “brought important lessons”.

“We are changing the way we operate around the world, with strengthened safety and security measures, preparedness training programmes, integrated rapid response, increased counselling and mental health support”, she said. “We are doing more to address the needs of surviving staff, as well as families of the victims in their long journey of healing”. 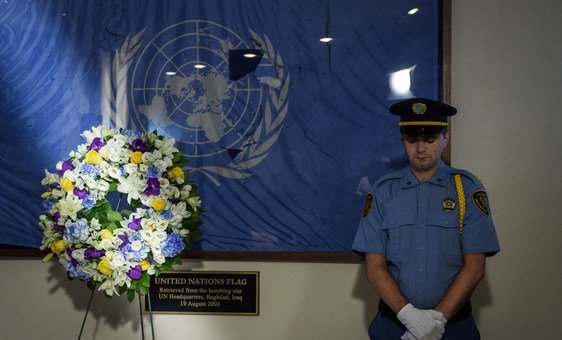 The UN held a wreath-laying ceremony to honour the memory of UN staff killed in the 2003 attack on the UN headquarters in Baghdad, Iraq. The day of the attack, 19 August, is now observed annually as World Humanitarian Day, by UN Photo/Loey Felipe

Since 19 August 2003, more than 4,500 humanitarians have been killed, injured, detained, kidnapped or otherwise prevented from carrying out their life-saving duties.

“That is an average of 280 humanitarians attacked in a year, or five every single week”, underscored the UN deputy chief. “Last year saw the second highest number of attacks on aid workers on record, with 405 aid workers attacked, 131 killed, 144 wounded and 130 kidnapped in a total of 226 separate incidents”.

Every day, over half a million humanitarian workers around the world stand on the front lines of war and disaster, braving dangers and difficulties to deliver assistance to people in crises, she noted. About 40 per cent of them are women, many of whom work in some of the most dangerous corners of the globe.

“Their presence makes our efforts more effective, from addressing health epidemics to providing support to victims of gender-based violence”, maintained Ms. Mohammed.  “Thanks to their efforts millions of people have found protection from conflict and had hope itself rekindled”.

Over the course of 24 hours, the UN Office for the Coordination of Humanitarian Affairs, OCHA, is recounting the stories of 24 incredible women, showing the range and diversity of their roles in humanitarian action – from an international model who established a school for girls in her native Democratic Republic of the Congo, to a volunteer in Lebanon who provides thousands of free meals to refugees and other people in need.

Meanwhile at an event in Gaza, UN Humanitarian Coordinator Jamie McGoldrick spelled out: “Women across Palestine are leading vital humanitarian work, but they continue to be under-represented and face ongoing obstacles in carrying out their work because of their gender”.

“Today”, he continued, “we not only honour their contribution, but we commit to doing more to support their work.”

On Twitter, the Food and Agriculture Organization (FAO) offered “a special thank you” to women humanitarians on the ground “helping people rebuild their livelihoods and boost their resilience”.

“Our thoughts go to all IOM [International Organization for Migration] staff who have lost their lives while working towards a better world”, tweeted the migration agency. “Today, we honor their memory, strength, and resilience”.

As it joins the international community in celebrating “the lifesaving work of women humanitarians”, the UN Population Fund (UNFPA) tweeted: “We also recognize the millions of women caught in conflicts and crises”.

In its tweet, the Framework Convention on Climate Change (UNFCCC) recalled that during the past 20 years, over 90 per cent of disasters requiring humanitarian aid were climate-related and that their number and severity is rising.

Listen to an interview with Silvia Risi from the Food and Agriculture Organization. She talks about her humanitarian work in DR Congo and what it means to be a woman humanitarian:

Six humanitarians killed in ‘obscene’ attacks in one week 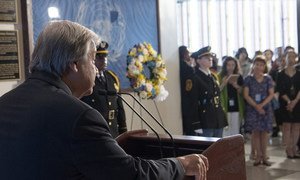 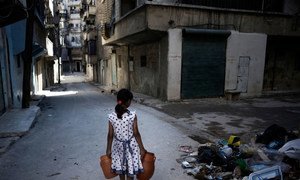 Remembering all the humanitarians killed in the line of duty just ahead of World Humanitarian Day, the United Nations relief chief on Friday, renewed the call for civilians and aid workers everywhere to be better protected.