Podcast: Escape from Warsaw’s Ghetto - Memories of a Child Witness 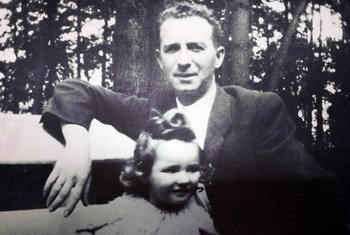 When Halina Wolloh was four, her grandfather hid her from the Nazi regime – behind a stack of textiles.

When her father decided to move the family from the Warsaw Ghetto, she learned The Lord’s Prayer in Polish, in case her identity was questioned.

As a young woman, she lived for years with her Jewish identity invisible to the world, finding refuge in the homes of non-Jewish Europeans in Poland, until finding safety across oceans.

Today, the 84-year-old mother of three and grandmother to six lives in Peru, where she and her parents arrived more than seven decades ago.

Having previously participated in a UN Holocaust remembrance event, Mrs. Wolloh sat down with Natalie Hutchison to detail her testimony in this edition of In Their Words: Surviving the Holocaust. Finding Hope about how, even in the darkest of times, expressions of humanity emerge.