PODCAST UPDATE: ‘We Know That it is True. We've Been There’ 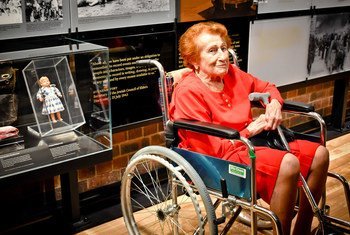 At the time of this interview, Veronica Phillips revisited the question, why and how she survived the Holocaust whilst some six million other Jews did not.

Ms. Phillips passed away on 24 February, 2021 at the age of 94, shortly after we first published what will now stand for posterity as her final interview, in which she graciously shared her deeply personal account of survival.

As a teenager, Ms. Phillips endured appalling treatment, designed to kill Jews and other groups systematically targeted under the Nazi regime. After more than 70 years of silence, she began to share her testimony in hopes future generations would learn from her tragedy.

For this podcast episode, she told Natalie Hutchison her moving story once more; from narrowly escaping death in the gas chambers of Ravensbrück, to rebuilding her life after the war.