People affected by leprosy should be fully recognized as persons with disabilities, both at the national and global levels, a UN independent human rights expert said on Friday.

Alice Cruz, who advocates for people diagnosed with the age-old disease, delivered her latest report to the UN General Assembly in New York.

Persons affected by #leprosy have been waiting too long for their disability rights to be recognised globally and nationally. States must do more – @srleprosy presents new report to #UNGA77.

She cited the physical impairments that leprosy causes, as well as discrimination based on harmful stereotypes surrounding the disease, as grounds for their full recognition in accordance with the UN Convention on the Rights of Persons with Disabilities.

“Family members of persons affected by leprosy self-identify as persons with psychosocial disabilities owing to stigmatization and discrimination on the ground of leprosy.

“Yet, persons affected by leprosy and their family members have been largely excluded from the global conversation about disability,” she said.

Leprosy - a chronic infectious disease that mainly affects the skin, eyes, upper respiratory tract, and peripheral nerves - has been around for thousands of years.

It is curable and treatment in the early stages can prevent disability, according to the World Health Organization (WHO).

Throughout history, people living with leprosy have often been shunned by their communities and even their families.

Countries can do more

While Ms. Cruz acknowledged progress at the national level to recognize equality for persons with disabilities, she urged countries to do more to effectively implement the provisions of the Convention on the Rights of Persons with Disabilities.

The General Assembly adopted the landmark treaty in December 2016, and it entered into force two years later.

Ms. Cruz expressed concern that disability rights seem to be restricted to social protection, and decisions on just who is entitled to such protection remain largely in the hands of the medical professions.

The rights expert was also concerned about the limited participation of persons affected by leprosy, and their representative organizations, in institutional matters relating to them.

She also urged countries to increase efforts to protect, promote and fulfil the rights of persons affected by leprosy by both recognizing their disability rights and ensuring their participation in policymaking.

“States should review the qualification requirements for social protection to ensure access for persons with invisible and psychosocial impairments, as well as for persons with disabilities living in poverty, recognising the additional costs of disability; and ensure a universal basic income for persons affected by leprosy,” she advised.

Ms.  Cruz was appointed by the UN Human Rights Council as Special Rapporteur on the elimination of discrimination against persons affected by leprosy and their family members.

Her mandate was established in 2017 and was extended for another three years in 2020. 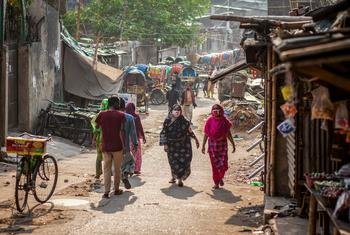 Climate change much deadlier than cancer in some places, UNDP data shows

The impact of climate change on health if carbon emissions remain high, could be up to twice as deadly as cancer in some parts of the world, according to new data released on Friday by the UN Development Programme (UNDP) and the Climate Impact Lab.