The UN Secretary-General issued a statement on Saturday expressing grave concern over the escalation of fighting in the Tigray region of Ethiopia, where Government troops and separatist forces have been locked in conflict since November 2020.

The latest surge in violence began in August, after a fragile five-month humanitarian truce, which has halted aid deliveries into the northern Ethiopian region, where around five million civilians are in need of aid.

Secretary-General @antonioguterres is gravely concerned about the escalation of the fighting in Tigray, which is having a devastating impact on civilians in what is already a dire humanitarian situation.
Full statement 👇
https://t.co/oYzSzg3h81

Aid distribution continues to be hampered by a lack of fuel, and a communications shutdown across Tigray, while Tigrayan commanders have claimed that Eritrea has launched an offensive in support of Ethiopian Government forces, according to news reports.

UN partner organisation the International Rescue Committee, has reported that one of its workers was killed in an attack in Tigray, while delivering aid to women and children in the town of Shire, on Friday.

In a statement on Saturday, the agency said another IRC staff member was also injured in the attack, and two other civilians reportedly killed and three injured during the bombing. Aid workers and civilians should never be a target, IRC added.

There has been no claim of responsibility for the attack, but Shire and other Tigrayan areas have suffered multiple airstrikes since August.

UN Secretary-General António Guterres said in the statement issued by his Spokeperson, that the uptick in fighting was having “a devastating impact on civilians in what is already a dire humanitarian situation”.

He is calling for an immediate cessation of hostilities.

“The Secretary-General reiterates his full support to an African Union led mediation process and reaffirms the United Nations readiness to support the urgent resumption of talks in order to reach a lasting political settlement to this catastrophic conflict.”

Just last month, African Union-mediated talks were due to take place in South Africa, but were postponed.

Hundreds of thousands have been displaced in Tigray as well as neighbouring northern regions of Amhara and Afar, while tens of thousands are believed to have been killed. Millions of lives are being impacted by the conflict.

In a humanitarian update on 4 October, UN Spokesperson Stéphane Dujarric, said UN staff were now being allowed to rotate in and out of Tigray once more, but life-saving air supplies by road and air needed to resume urgently.

“Those flights have remained suspended since 25 August, halting the transportation of supplies and operational cash into the region, which is vital for operations”, he said, briefing journalists in New York.

“Despite security concerns, access restrictions and lack of resources, our partners continue to respond in areas they can access in the three regions”, he said.

“In Tigray, the remaining humanitarian stocks continue to be distributed and basic services provided, despite the very difficult operational challenges.”

As of 26 September, 32 mobile health and nutrition clinics were still operating in 58 health facilities and displacement sites in the region, he said. In Amhara and Afar, newly displaced families are being helped with food, water, emergency shelter and other supplies, as well as health services, Mr Dujarric added. 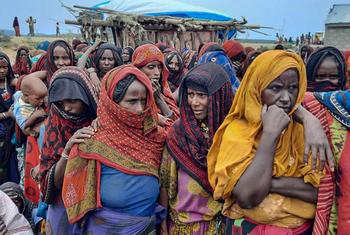 Throughout Ethiopia’s Tigray, Afar and Amhar regions, women and girls are becoming increasingly vulnerable to abduction and sex trafficking as they flee ongoing armed conflict, a group of UN-appointed independent human rights experts warned on Monday. 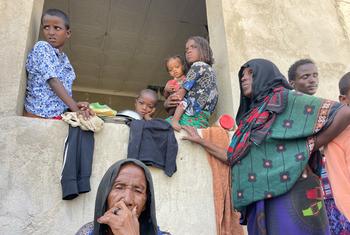 Ethiopia’s people are once again “mired…in the intractable and deadly consequences” of conflict between Government troops and forces loyal to Tigrayan separatist fighters, who are all likely responsible for war crimes, top rights investigators said on Thursday.