The Security Council must act urgently to support Haiti as the gang, economic, and fuel supply crises there “intersect in altogether new and frightening ways”, the head of the UN Mission in the country, BINUH, said on Monday.

Meanwhile, political stakeholders are still struggling to find common ground and define a path to elections against this backdrop, she added.

Briefing the @UN Security Council today on recent developments in #Haiti, SRSG and @BINUH_UN head Helen La Lime said that “an economic crisis, a gang crisis, and a political crisis have converged into a humanitarian catastrophe.” https://t.co/W3O9PIBuxv pic.twitter.com/ZpQg9JRCkO

“An economic crisis, a gang crisis, and a political crisis have converged into a humanitarian catastrophe. We must not lose hope, but rather combine our efforts to find a pathway to a better tomorrow,” said UN Special Representative Helen La Lime, speaking from the capital Port-au-Prince.

“A Haitian-led political solution is the first necessary step to address the current crisis. To support Haitians in their effort towards a better future, this Council must take urgent action.”

Gang violence continues to disrupt daily life in Haiti, driving more than 20,000 people from their homes.

The UN estimates that at least 1.5 million people in the Caribbean country have been directly impacted by recent unrest, with gender-based violence, and in particular rape, being used systematically.

The economic crisis has caused food prices to soar, while fuel is often available only on the black market.

Protests broke out in Haiti after the Prime Minister announced on 11 September that the Government will reduce some $400 million in fuel subsidies in efforts to increase revenue for social programmes.

By the following day, barricades had been erected throughout the country, prompting a nationwide shutdown, with the situation persisting in the capital for a full five days.

One of the largest gang alliances also blocked the main fuel terminal there on 12 September. The siege lasted for over a week, despite concerted operations by the police over the weekend.

On the political front, Ms. La Lime said she has maintained good relations with all sectors of society and has encouraged dialogue.

“While so-far inconclusive efforts have led to a perceived stalemate, national stakeholders have begun to re-engage with a renewed sense of urgency. In the past weeks, Government representatives, political groups, and civil society organizations launched new consultations on ways to forge a wider consensus on a path to elections. But we’re not there yet,” she said.

The insecurity has also severely curtailed humanitarian access and made it “very difficult and dangerous” to deliver, according to Valerie N. Guarnieri, Deputy Executive Director at the World Food Programme (WFP).

“We expect food security to further deteriorate this year, surpassing the record high of 4.5 million people estimated to face crisis or worse levels of acute food insecurity, including 1.3 million people in emergency,” she said.

The gangs strangling the capitol are blocking access to fuel supplies and key logistics hubs, including ports and airports, as well as road access to other areas of the country.

Protesters have also ransacked and looted humanitarian warehouses, with WFP losing one-third of its food stocks in just one week. UN agencies and partners estimate they have lost some $6 million during such attacks, which come at the peak of the hurricane season.

Ms. Guarnieri stressed that WFP and other aid agencies intend to stay and deliver in Haiti despite the challenges, but will need greater assistance.

“Simply put, we're not in a position to support all of those that need our help due to the general lawlessness and operational environment,” she said.

“Therefore, we're looking forward to increased support from the Member States, from you, to further facilitate humanitarian access as well as protection of humanitarian actors, personnel and assets.”

The armed groups not only compromise stability and security, they also hamper efforts towards peace and lasting development, said Ghada Fathi Waly, Executive Director of the UN Office on Drugs and Crimes (UNODC).

Haiti is particularly vulnerable to the illicit traffic in commodities, particularly drugs, firearms and ammunition. due to its 1,500 kilometres of coastline and land border with the Dominican Republic.

Ms. Waly said UNODC is supporting border management and is working to map out transnational criminal activities in Haiti, as well as their regional impact.

They are also assisting the authorities in building capacity to inspect containers at strategic points such as ports and border crossings.

“These efforts should ensure that customs revenue be effectively sent to activities to support border modernization and border management,” she said, speaking in French. 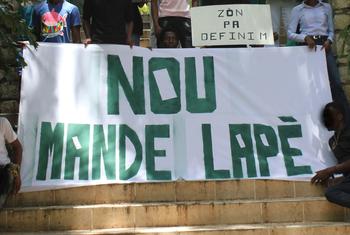 A fund set up by the United Nations to build peace, prevent violence, reinforce justice, strengthen the rule of law and security institutions, and boost resilience amongst Haiti’s most vulnerable people, is supporting government efforts to restore security and stability in the country. 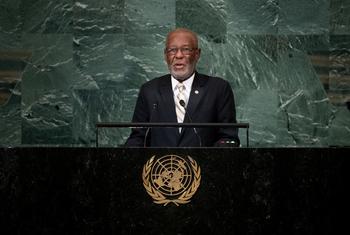 Escalating gang violence has set off a crisis that is threatening “the very foundations of the rule of law” in Haiti, according to Foreign Minister Jean Victor Geneus, who told UN delegates in New York on Saturday that the authorities’ efforts to maintain order and ease ongoing political tensions could only succeed with robust international support.