The UN Human Rights Committee found on Friday that Australia’s failure to adequately protect indigenous Torres Islanders against climate change impacts, has violated their rights to enjoy their culture, free from “arbitrary interference” with their private life, family and home.

The Committee issued its ground-breaking decision after examining a joint complaint filed by eight Australian nationals and six of their children – all indigenous inhabitants of Boigu, Poruma, Warraber and Masig, four small, low-lying islands in the country’s Torres Strait region.

The Islanders claimed their rights had been violated as Australia failed to adapt to climate change through upgrading seawalls on the islands and reducing greenhouse gas emissions, among other necessary measures.

“This decision marks a significant development as the Committee has created a pathway for individuals to assert claims where national systems have failed to take appropriate measures to protect those most vulnerable to the negative impacts of climate change on the enjoyment of their human rights,” Committee member Hélène Tigroudja said.

In their complaint, the Islanders claimed that changes in weather patterns had direct, harmful consequences on their livelihood, culture, and traditional way of life.

They indicated to the Committee that severe flooding caused by the tidal surge in recent years has destroyed family graves and left human remains scattered across their islands, arguing that maintaining ancestral graveyards and visiting and communicating with deceased relatives are at the heart of their cultures.

Moreover, the most important ceremonies, such as those for coming-of-age and initiation, are only culturally meaningful if performed in the community's native lands.

The Islanders argued that changes in climate have triggered heavy rainfall and storms, degrading land and trees.

This, in turn, has reduced the amount of food available from traditional fishing and farming.

For example, on Masig Island, the rising sea level has caused saltwater to seep into the soil and coconut trees to become diseased, subsequently killing off the fruit – an important part of the Islanders’ traditional diet.

Considering the Islanders’ close, spiritual connection with traditional lands, and their cultural integrity dependence on the health of surrounding ecosystems, the Committee found that Australia’s failure to take timely and adequate measures to protect the Islanders from climate change, had violated their rights to enjoy their own culture and to be free from arbitrary interferences with their private life, family and home.

“States that fail to protect individuals under their jurisdiction from the adverse effects of climate change may be violating their human rights under international law,” Ms. Tigroudja stated.

In the same decision, the Committee also indicated that despite Australia’s series of actions – such as new seawalls for the four islands by next year – additional timely and appropriate measures were required to prevent potential loss of life.

© 350 Australia
Storm surge on Masig Island in the Torres Straits

The Committee decided that, under the Covenant, robust national and international efforts are needed to mitigate the effects of climate change, which otherwise may be a violation of the right to life.

To remedy the situation, the members asked Australia to compensate the indigenous Islanders for the harm suffered, engage in meaningful consultations with their communities to assess their needs, and take measures to continue securing the communities’ safe existence on their respective islands. 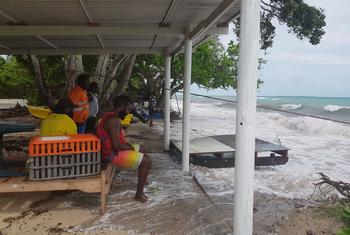 Yessie Mosby is one of the so-called Torres Strait Eight, a group from the Pacific Islands which lodged a complaint with the UN Human Rights Council, that Australia is not doing enough to protect their people from climate change, in the first ever case of its kind. Mr. Mosby explained to UN News why they decided to take this unprecedented step.