On the 15th anniversary of the International Day of Democracy, commemorated on Thursday, the UN chief observed that “across the world, democracy is backsliding”.

“Civic space is shrinking. Distrust and disinformation are growing. And polarization is undermining democratic institutions,” Secretary-General António Guterres said in his video message marking the day.

He said that “now is the time” to raise the alarm, and “reaffirm that democracy, development, and human rights are interdependent and mutually reinforcing”.

“Now is the time to stand up for the democratic principles of equality, inclusion, and solidarity”.

The UN chief said it was important to stand with those who strive to secure the rule of law and promote full participation in decision-making.

Mr. Guterres drew attention to this year’s focus, which is on free, independent, and pluralistic media, which he described as the “cornerstone of democratic societies”.

He warned that from verbal assault to online surveillance and legal harassment, attempts to silence journalists are “growing more brazen by the day” - especially against women journalists.

As media workers face censorship, detention, physical violence, and even killings – often with impunity – the UN chief reminded that “such dark paths inevitably lead to instability, injustice and worse”.

“Without a free press, democracy cannot survive. Without freedom of expression, there is no freedom,” underscored the Secretary-General, urging the world to join forces “to secure freedom and protect the rights of all people, everywhere”.

According to the UN Educational, Scientific and Cultural Organization (UNESCO), over the past five years, 85 per cent of the world’s population has experienced a decline in press freedom.

The UN agency elaborated that in attempts to hamper their work, media globally are increasingly facing attacks, online and offline.

They are being targeted with increasing detention; the use of defamation laws; cybersecurity or hate speech laws to curb online expression; and growing surveillance technologies.

The COVID-19 crisis has also shown how it has become more critical than ever for media to gather and evaluate facts and fight disinformation. Equally critical is ensuring online safety and security.

Women journalists are particularly impacted. UNESCO and the International Center for Journalists found that 73 per cent of 714 women journalists from 125 countries have reported experiencing online violence in the course of their work.

Moreover, attempts to silence journalists are growing more brazen by the day and they often pay the ultimate price.

From 2016 to the end of 2021, UNESCO recorded the killings of 455 journalists, who either died for their work or while on the job.

“On this International Day of Democracy, we are celebrating more than a simple principle of political organization: We are celebrating an ideal whose foundations are “the dignity, equality and mutual respect” of people – the very foundations of the Constitution of UNESCO,” said Director-General Audrey Azoulay.

Meanwhile, others in the UN family took to Twitter to throw their weight behind the day by promoting its importance.

UN Women, the entity for gender equality and women’s empowerment, encouraged women to “participate in political processes and to support their aspirations for freedom, equality, autonomy and self-determination”.

UN humanitarian coordination office, OCHA, used the day to “thank journalists who play an essential role for democracy,” while stressing the need to “fight mis- and disinformation and protect the press, including those covering conflicts and humanitarian crises, who are increasingly targeted with threats and violence”.

Democracy is a core UN value, which the Organization supports by promoting human rights, development, and peace and security.

Under-Secretary-General for Political and Peacebuilding Affairs Rosemary DiCarlo explains her role as UN focal point for electoral assistance, a key aspect of democracy. 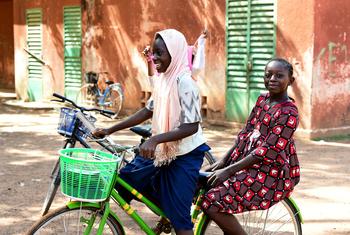 Democratic and responsible governance is needed to counter ongoing insecurity in West Africa and the Sahel, the UN Special Representative for the subregion told the Security Council on Thursday.