Highlighting his continued grave concern over the situation, the UN chief again warned that any damage to Zaporizhzhia, or to any other nuclear facility in Ukraine, could result in a wide-reaching catastrophe.

I remain gravely concerned about the situation in and around the Zaporizhzhia plant, including reports of recent shelling.Let's tell it like it is: Any damage - whether intentional or not - in Zaporizhzhia or any other nuclear facility in Ukraine, could spell catastrophe. pic.twitter.com/oi5a6sgOUS

“All steps must be taken to avoid such a scenario. Common sense and cooperation must guide the way forward. Any action that might endanger the physical integrity, safety or security of the nuclear plant is unacceptable,” he said.

The Secretary-General stressed that efforts to re-establish the plant as purely civilian infrastructure are vital.

“As a first step, Russian and Ukrainian forces must commit not to engage in any military activity towards the plant site or from the plant site. The Zaporizhzhia facility and its surroundings must not be a target or a platform for military operations,” he said.

The second step would entail securing an agreement on a demilitarized perimeter.

“Specifically, that would include a commitment by Russian forces to withdraw all military personnel and equipment from that perimeter and a commitment by Ukrainian forces not to move into it. Operators at the plant must be able to carry out their responsibilities, and communications must be maintained”.

The Secretary-General called for commitment to support inspectors from the International Atomic Energy Agency (IAEA) stationed at the plant.

Following months of negotiations, a 14-member team from the nuclear watchdog arrived there last week.  Two will remain at the site, which has been under Russian control since the early days of the conflict.

“I trust that the IAEA experts now deployed to Zaporizhzhia will be able to carry out their work without hindrance and contribute to ensuring lasting nuclear safety and security at the plant.  All of us have a stake in the success of their critical mission,” he said.

IAEA chief Rafael Mariano Grossi, who led the mission, had described it as “historic”. The fact that staff are now there is “unprecedented”, he added.

Citing nuclear disasters in Chernobyl and Fukushima, as well as the conflict in Iraq, he recalled that while agency inspectors had experienced “difficult circumstances,” it had always been in the aftermath.

“We in this case have the historical, ethical imperative to prevent something from happening. And by having established this presence, and by agreeing to a special safety and security protection zone…we have the opportunity to prevent this from happening.”

The mission report, published on Tuesday, provides concrete recommendations to address the seven pillars of nuclear safety that Mr. Grossi had outlined at the beginning of the war.

Although the first pillar calls for not violating the physical integrity of nuclear facilities, “this happened, and continues to happen,” he said.

“The hits that this facility has received and that I could personally see and assess together with my experts is simply unacceptable. We are playing with fire and something very, very catastrophic could take place,” he warned.

The report proposes setting up a nuclear safety and security protection zone that would be limited to the perimeter and the plant itself.

Other recommendations call for removing all military vehicles and equipment from nuclear buildings at the site and ensuring the return to clear and routine responsibilities for staff, in addition to re-establishing an “appropriate” work environment. 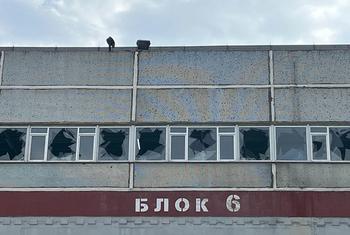 Further damage to the embattled Zaporizhzhya Nuclear Power Plant in Ukraine “cannot” be allowed to happen, the head of the International Atomic Energy Agency (IAEA) has said.