On 14 August 2021 a 7.2 magnitude earthquake struck Haiti, destroying, or rendering uninhabitable tens of thousands of houses across three departments in the south of Haiti, including Plaisimond Milaure’s home. Since then, she’s been living in a tent outside the city of Les Cayes, supported by UN agencies. One year on, she is ready to return.

“When the earthquake struck, I had no idea what it was as I had never experienced something so loud and dramatic before. I thought it was an act of God and I was terrified.

My whole house was shaking so I rushed outside with my daughter to see what was going on, and I realized it was a tremor from beneath the earth. Then part of my house collapsed, and large cracks appeared in its cinder block walls.

The community came together

We were lucky, because no-one in my family was injured, but I knew many neighbours who died. The community, which is rural and made up of farmers and people buying and selling goods, came together and we helped each other. We saved many children by digging them from beneath the rubble.

I think the earthquake made us stronger as a community and that helped us when we moved into this temporary camp in Devirel on the edge of the city of Les Cayes, just five days after we fled from our home.

Life here is very tough. We live, in twos and threes, in small shelters made from plastic sheeting. It is hot because there are no trees here and when it rains it is very muddy. There is not much to eat, but we continue to look after each other and share the small amount of food that we have.

When we arrived, we received a lot of support from the United Nations*. We received a hygiene kit and were able to use a bathroom which had been built for us. I received some cash payments so I could afford to carry on sending my daughter to school and at one point she received free school meals.

My aunt also received some financial assistance as she is disabled and particularly vulnerable. I’m very grateful for this support.

Sometimes, I can earn money by helping to harvest a neighbour’s crops, but it’s difficult to find work, so I have to live on very little. It’s difficult to change one’s life if you don’t have the financial means to do so. I would like to return to my home with my daughter, but I’m too scared to do that before I repair it. So, I will try and save some money to make the repairs.

One year after the earthquake, I am still optimistic for the future; I know I can rely on myself and my community for a better life.”

*A range of UN agencies provided support to Plaisimond Milaure and her neighbours, including cash transfers for vulnerable and disabled people as well as to support the schooling of kids (International Organization for Migration, IOM) hygiene kits (IOM and UNFPA) bathroom facilities (UNICEF) and school meals, World Food Programme, WFP. The United Nations Office for the Coordination of Humanitarian Affairs (OCHA) coordinated the UN’s post-earthquake response. 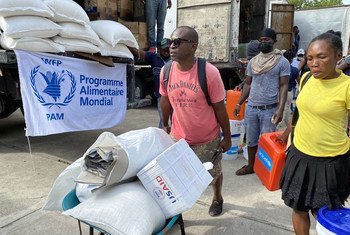 WFP steps up support in Haiti

The World Food Programme (WFP) is stepping up ongoing support to Haitians who are now facing destroyed homes, lost livelihoods and little or no access to food in the wake of the 14 August earthquake, the UN agency reported on Thursday.