Authorities in Brazil must step up efforts to find a British journalist and an indigenous rights activist who disappeared nearly a week ago in a dangerous remote area of the Amazon, the UN human rights office, OHCHR, said on Friday.

Dom Phillips, a regular contributor to The Guardian, and Bruno Araújo Pereira, an employee with the Brazilian indigenous affairs agency, went missing in the Javari Valley, a major indigenous territory located in the western Amazon near Peru and Colombia.

They were last seen on Sunday travelling in a boat on the Itaquaí River, reportedly to conduct interviews with indigenous communities.

The Javari Valley is the second biggest indigenous territory in Brazil and is believed to have one of the world’s highest concentrations of uncontacted indigenous tribes, OHCHR said.

The area is also seriously affected by illegal trafficking, mining, and fishing, and it is reportedly suffering from increased activity by armed groups.

Mr. Phillips and Mr. Pereira have played important roles in raising awareness and defending the human rights of the indigenous peoples in the region, including by monitoring and reporting illegal activities.

OHCHR is concerned about the continued lack of information on their whereabouts and wellbeing, Spokesperson Ravina Shamdasani told journalists in Geneva.

“We urge Brazilian authorities to redouble their efforts to find Phillips and Pereira, with time of the essence in view of the real risks to their rights to life and security,” she said.

“It is therefore crucial that authorities at the federal and local levels react robustly and expeditiously, including by fully deploying available means and necessary specialized resources to effectively search over the remote area in question.”

The human rights office also commended civil society groups who have been coordinating efforts to locate the two men, including by sending search-and-rescue missions to the area.

OHCHR also expressed concern over the wider issue of constant attacks and harassment targeting activists, environmentalists, and journalists in Brazil, stressing that the authorities are responsible for protecting them and ensuring that they can exercise their rights.

‘We are not afraid’: Indigenous Brazilian women stand up to gender violence 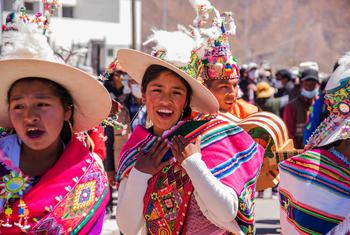 It is essential to close the gap between the great potential of the Americas region and the daily struggles facing its people, UN Secretary-António Guterres told senior officials from across the hemisphere on Thursday.