© UNICEF/Guy Hubbard
Peacekeepers escort a humanitarian convoy to the village of Pinga in North Kivu, Democratic Republic of the Congo.

“It is imperative that this Council lend its full weight to ongoing regional efforts to defuse the situation and bring an end to the M23 insurgency, once and for all,” said Martha Pobee, an Assistant Secretary-General for the UN’s political affairs and peace operations, covering Africa.

Civilians are paying a heavy price in the violence, she said, citing information from the UN humanitarian affairs office, OCHA.  Some 75,000 people were displaced in fighting last week in North Kivu province, while another 11,577 have crossed the border into Uganda.

Two peacekeepers with the UN’s Mission in the country, MONUSCO, suffered minor injuries in the hostilities, while at least 16 Congolese soldiers were killed and 22 wounded.

The UN and key regional and international partners have unanimously called for the M23 to lay down their weapons and join the process for disarming and demobilizing combatants.

Ms. Pobee told ambassadors she was encouraged that the DRC and Rwanda have decided to refer to a verification mechanism under the International Conference on the Great Lakes Region (ICGLR), known as the EJVM, to investigate reports of human and material damage caused by explosive ordinance originating from across their respective borders on 23 May.

The head of the African Union has also called the leaders of two countries to press for calm and a peaceful resolution of any disagreements.

“Indeed, every effort should be made to ensure the parties make full use of existing mechanisms, such as the EJVM, which play an essential role in maintaining the climate of trust and cooperation that remains essential to effectively tackle the common security challenges facing the DRC and its neighbors,” Ms. Pobee told ambassadors.

“Continued dialogue between the concerned governments remains indispensable to avoid a further escalation of violence in eastern DRC.”

The UN’s Special Envoy for the Great Lakes Region, Huang Xia, addressed the Council by videoconference.

Speaking in French, he said the situation today was reminiscent of the M23’s operations nearly a decade ago, when the group seized the city of Goma, capital of North Kivu province.

He urged ambassadors to do everything to avert escalation and another crisis which would have immeasurable humanitarian and political consequences for the region.

Mr. Huang said eradication of armed groups in the eastern DRC requires a comprehensive approach, particularly in the context of the M23 resurgence and persistent insecurity.

However, he was convinced the “military option” alone will not be enough, underlining his Office’s ongoing efforts towards engagement.

He also stressed the importance of continued high-level dialogue among regional leaders, and emphasized the need to continue mobilization of bilateral and regional mechanisms, including the ICGLR and the Nairobi Conclave political process.

The UN envoy is embarking on a mission to all concerned countries in the region starting tomorrow, delivering a message that is threefold and simple.

“My message to the countries in the region is as follows,” he said. “The region doesn’t need a new crisis; let’s keep the channels of dialogue open at all levels, including at the community level; and help preserve the progress achieved in the recent years thanks to the various cooperation mechanisms.” 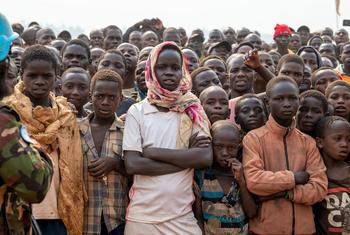