Although many migrants worked on the frontlines of the COVID-19 pandemic, risking their own lives to save others, they were at times denied access to basic services and excluded from recovery plans, UN Secretary-General António Guterres said in New York on Thursday.

Mr. Guterres was addressing the official opening of a meeting to review progress towards implementing the Global Compact for Safe, Orderly and Regular Migration, adopted by governments in 2018.

People-centred migration policy is about promoting the well-being of migrants and their communities 🫂➡️A team in Rome has been providing health services to undocumented migrants during the pandemic👩‍⚕️😷🩺More examples of GCM practices: https://t.co/KRZ2Dq9hCd🖱️ #Migration2022 pic.twitter.com/wBM3L4cuLQ

The first International Migration Review Forum will also examine the interplay between migration and broader concerns, including the pandemic, conflict, development finance, and the climate emergency.

Lessons from the pandemic

While commending efforts to improve the lives of migrants, such as helping them to integrate into host countries, Mr. Guterres noted that these measures are too often the exception and not the norm.

“The COVID-19 pandemic has painfully demonstrated how far we still are from realizing rights-based, child-sensitive, and gender-responsive governance of international migration for all,” he said.

Globally, there are an estimated 281 million international migrants worldwide, who have left their home countries for travel, work, or other opportunities, or due to conflict, poverty, natural disasters or other crises.

Migration is a fact of life, the Secretary-General said, but too often it has been poorly managed, uncoordinated, misunderstood, and vilified.

“Today, over 80 per cent of the world’s migrants move between countries in a safe and orderly fashion.  But unregulated migration – the cruel realm of traffickers – continues to extract a terrible cost,” said Mr. Guterres.

He underlined the humanitarian, moral and legal imperatives for safe and orderly migration as thousands still die each year in the pursuit of opportunity, greater dignity, and a better way of life.

“We must do more to break the stranglehold of smugglers and better protect migrants in vulnerable situations, in particular women and girls,” he said.

Countries must also expand and diversify what the UN chief called “rights-based pathways for migration” and ensure that returns and readmissions are safe and in full accordance with international law.

The Global Compact represents the international community’s resolve to put human rights into practice to transform how we understand and manage migration, he said.

Mr. Guterres said migrants are a part of society and must also be part of the renewed social contract, outlined in his Our Common Agenda report, to build trust, increase participation, and strengthen social cohesion.

“The Global Compact speaks to the heart of the mission of the United Nations. It is a global response to a global phenomenon for which we need to be much better prepared.”

The Secretary-General also highlighted support to Member States through the UN Network on Migration, which has established a mechanism to contribute technical, financial and human resources towards the Compact’s implementation.

The four-day International Migration Review Forum began on Tuesday and will conclude on Friday.  Roundtables and a policy debate were held on the first two days, with the final two days devoted to plenary meetings. A progress declaration is set to be adopted

The Secretary-General urged participants to secure a strong political outcome through actionable pledges and strong monitoring and follow-up mechanisms.

“Let us keep up the momentum as we work together for a safer and more prosperous future for us all, including migrants,” he said.

In his remarks, the President of the UN General Assembly, Abdulla Shahid, emphasized the need to act now, drawing attention to "the terrible human cost".

He said at least 8,436 migrant deaths were recorded globally between 1 January 2019 and 24 November 2021. A further 5,534 migrants went missing and are presumed dead, adding that these were just the reported numbers.

“Behind every number is a family, a community, a life. They seek what we seek. They dream what we dream – Opportunity. Dignity. A better life,” said Mr. Shahid.

“Our ability to protect and to integrate migrants is not only a barometer of the health of our institutions – but of the empathy we feel for our fellow human beings; of our will to do right by our own conscience; of our commitment to upholding the basic human rights of all.”

Mr. Shahid told the conference that as countries work to recover from the pandemic, and to achieve sustainable development by 2030, they will need the contribution from all in society, including migrants.

More than 59 million internally displaced in 2021 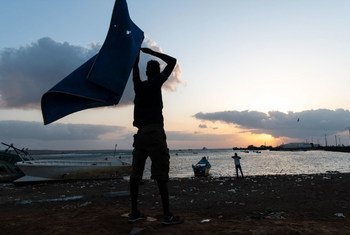 Deaths at sea on migrant routes to Europe almost double, year on year

More than 3,000 people died or went missing while attempting to cross the Mediterranean and the Atlantic last year, hoping to reach Europe, the UN refugee agency, UNHCR, said on Friday, appealing for $163.5 million to assist and protect thousands of refugees and asylum seekers.