© UNDP/Borja Lopetegui Gonzalez
A crowded sidewalk with various items for sale in a Port-au-Prince neighbourhood.

Against the backdrop of shifting population demographics, conflicts, post-pandemic shocks and climate change, the developing world is on the brink of a “perfect storm” of debt, food and energy crises, experts warned the Commission on Population and Development on Monday.

While sounding the alarm over the planet’s unequal COVID-19 recovery and notable reductions in public spending for youth, older people and other vulnerable populations, officials from across the UN system stressed that this multipronged crisis has a “decidedly female face.”

Opening its fifty-fifth session under the theme “Population and sustainable development, in particular sustained and inclusive economic growth,” marks success for a body that has historically been plagued by gridlock and disagreement.

“We still see the immense wisdom of putting women and girls at the centre of economic and social development.”— Dr. Natalia Kanem at the opening of the 55th Session of the Commission on Population and Development (CPD)See her full speech: https://t.co/ZqKRMv6kt5#CPD55 pic.twitter.com/V5PdHYKqsl

With poverty and inequality gaining renewed attention amid the COVID-19 pandemic, the insights outlined in the Programme of Action agreed upon at the 1994 International Conference on Population and Development in Cairo, Egypt are as relevant today as ever.

Although the world’s challenges are not caused by population growth, they are compounded by it, making it more difficult to tackle, he said.

Rebecca Grynspan, head of the UN Conference on Trade and Development (UNCTAD), warned that a systemic debt crisis is unfolding for billions in the developing world – with inflation at a multi-decade high and civil unrest brewing in all corners of the world.

She drew attention to the world’s large generation of young people, as well as women, voicing hope that their innovative ideas will help reverse these negative trends.

Deputy Secretary-General Amina Mohammed agreed that the pandemic lent a fresh urgency to the challenges being discussed by the Commission.  COVID-19 kept boys and girls out of school, increased the burden of care work — especially for women — and exacerbated gender-based violence.

At the same time, the world remains far off track on the goal of eliminating hunger and malnutrition by 2030, and the numbers of people affected by hunger are projected to increase by tens of millions as the war in Ukraine causes food and energy prices to skyrocket.

“In the face of this gathering storm of adversity, we must come together as an international community,” she said, adding, “we urgently need to renew the social contract to rebuild trust and social cohesion.”

“Lack of bodily autonomy and reproductive choices continue to block women’s path to equality and full participation in economic life,” she said, expressing concern over declining funding for population-related matters – especially sexual and reproductive health and reproductive rights – as countries shift their priorities amid the pandemic.

“We cannot afford further reversals – the stakes for women, girls and young people, and for their societies, are far too high.”

UN Photo/Manuel Elías
Deputy Secretary-General Amina Mohammed (on screen) addresses the opening of the Commission on Population and Development, CPD55.

In her keynote address, Jayati Ghosh, Professor in the Department of Economics, at the University of Massachusetts at Amherst, emphasized that the “perfect storm” of challenges described by Ms. Grynspan cannot be tackled without inclusion.

That means reducing inequalities, which will always engender backlash and pushback.

She also voiced concern over the continuing disinvestment in care work, a burden which will only increase amid future demographic challenges and climate change impacts.

“If we do not empower women … we will be unable to deal with the major challenges facing society,” she cautioned. 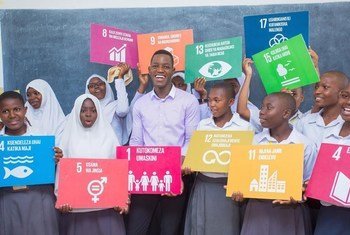 Development financing crucial to get global economy back on track

The global economy is under severe stress and the Sustainable Development Goals (SDGs) are in “need of urgent rescue”, the deputy UN chief told the Financing for Development Forum on Monday.