© UNFPA/Ruth Carr
Despite her unplanned pregnancy, a teenage girl in Thailand is determind to get into university.

Nearly half of all pregnancies, totalling 121 million each year worldwide, are unintended, according to a new report published on Wednesday by the UN’s sexual and reproductive health agency, UNFPA.

#DidYouKnow: Nearly half of all pregnancies are not by choice?Let @UNFPA show you why the most life-altering reproductive choice is no choice at all and start #SeeingTheUnseen crisis today: https://t.co/WA8TIf1MIg pic.twitter.com/qLWajcc4pJ

The ground-breaking Seeing the Unseen: The case for action in the neglected crisis of unintended pregnancy, warns that this human rights crisis has “profound consequences for societies, women and girls and global health”.

‘No choice at all’

Over 60 per cent of unintended pregnancies end in abortion and an estimated 45 per cent of all abortions are unsafe, accounting for five to 13 per cent of all maternal deaths recorded, according to the UNFPA’s flagship State of World Population 2022 report.

This is also having a major impact on the planet’s ability to reach the Sustainable Development Goals (SDGs) by the 2030 target date.

Moreover, the war in Ukraine and other conflicts and crises, are expected to drive an increase in unintended pregnancies, as access to contraception is disrupted and sexual violence increases.

“For the women affected, the most life-altering reproductive choice – whether or not to become pregnant – is no choice at all,” said the UNFPA chief.

For example, an estimated 257 million women around the world who want to avoid pregnancy are not using safe, modern methods of contraception.

And where data is available, nearly a quarter of all women, feel unable to say no to demands for sex.

A range of factors also contribute to unintended pregnancies, including a lack of sexual and reproductive healthcare; contraceptive that does not suit women's circumstances; harmful norms surrounding women controlling their own bodies; sexual violence and reproductive coercion; and shaming in health services.

These all reflect the pressure that societies place on women and girls to become mothers.

© UNFPA/Ruth Carr
A lack of information or awareness about sexual and reproductive health led to an unintended pregnancy for an 18-year-old girl in Timor Leste.

Crisis and conflict rob women of their agency at all levels, drastically increasing the risk of unintended pregnancy.

Women often lose access to contraceptives and sexual violence increases, according to the report, which cites studies showing that over 20 per cent of refugee women and girls will face sexual violence.

“If you had 15 minutes to leave your house, what would you take? Would you grab your passport? Food? Would you remember your contraception?” asked Dr. Kanem.

After a crisis starts, sexual and reproductive health and protection services save lives – UNFPA chief

“In the days, weeks and months after a crisis starts, sexual and reproductive health and protection services save lives, shield women and girls from harm and prevent unintended pregnancies. They are as vital as food, water and shelter.”

The report shows how easily the most fundamental rights of women and girls are pushed to the backburner in both times of peace and during war.

It calls on decision-makers and those in charge of health systems to help prevent unintended pregnancies by improving accessibility, acceptability and contraception choices - while also urging policy makers and community leaders to empower women and girls to make affirmative decisions about sex, contraception and motherhood.

If this is done, women and girls will be able to contribute fully to society with the tools, information and power to decide for themselves whether or not to have children.

“By putting the power to make this most fundamental decision squarely in the hands of women and girls, societies can ensure that motherhood is an aspiration and not an inevitability,” concluded the UNFPA chief.

The war in Ukraine is also likely to drive an increase in unintended pregnancy, said UNFPA's Monica Ferro, briefing journalists in Geneva on Wednesday.

“We are foreseeing that 265,000 women are pregnant in Ukraine and in the next three months 80,000 will give birth. So, if there is no health facility for them to give birth, to have a skilled attendant’s birth - or if they don’t have access to healthcare - this is going to increase as we know maternal mortality, and morbidity.”.

Earlier this month, a maternity hospital was targeted by shelling in the stricken coastal city of Mariupol.

As part of the UN’s response, UNFPA has shipped essential medicines and life-saving sexual and reproductive health services and supplies to Ukraine. 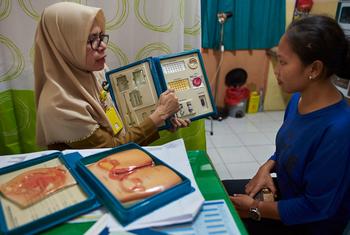 Data analysis on unintended pregnancy and abortion from 150 countries has revealed major disparities in accessing sexual and reproductive healthcare, the UN health agency, WHO, said on Thursday.