The Belarusian Government’s continuing crackdown on political opponents, civil society, journalists and lawyers has seen the fundamental human rights of tens of thousands violated, with no sign of any of the perpetrators being held accountable, the UN rights office, OHCHR, reported on Wednesday.

The report details the findings of OHCHR’s examination of the human right situation in Belarus, mandated by the UN Human Rights Council.

The human rights of tens of thousands of people in #Belarus have been violated by the Government’s continued crackdown on opponents, civil society, journalists & lawyers, says new OHCHR report. “A situation of complete impunity in Belarus”–@mbachelet.https://t.co/JyoTZtt6hT pic.twitter.com/akzlEF8nhz

The review covers the run-up to the disputed 9 August 2020 elections - in which sitting President Alexander Lukashenko claimed victory amidst widespread allegations of vote rigging - up to 31 December 2021, drawing on 145 first-hand interviews, as well as “analysis of a wide range of information and evidence”, said the OHCHR.

“The examination not only lays bare the violations inflicted on people trying to exercise their fundamental human rights, but highlights the inability of victims to access justice,” said UN High Commissioner for Human Rights, Michelle Bachelet.

“The authorities’ extensive and sustained actions to crush dissent and repress civil society, independent media and opposition groups, while at the same time shielding perpetrators, points to a situation of complete impunity in Belarus”, she added.

When victory was declared by the president in August, hundreds of thousands rallied to voice their opposition peacefully, meeting a “massive and violent crackdown”, the report says, with arrests and detentions reaching a scale unprecedented in Belarus.

The report says testimony indicates arrests were largely random, with security forces pursuing and subduing any person within reach.

In addition, men without insignia and wearing balaclavas took part in the forced dispersal of protests, “creating a climate of fear and lawlessness,” the report says. Broad use of unnecessary and disproportionate force repeatedly violated people’s rights, including to freedom of expression, assembly and association.

Between May 2020 and May 2021, at least 37,000 people were detained, many of them placed in administrative detention for up to 15 days. Some 13,500 people were arbitrarily arrested and detained between 9 and 14 August alone.

The report indicates that torture and ill-treatment were widespread and systematic, with individuals targeted for their real or perceived opposition to the Government or the election results.

Many victims feared filing a complaint, while those who did had their cases dismissed.

By the end of last year, 969 people were being held in prison on what OHCHR’s investigation suggests are purely politically motivated charges, with several activists given sentences of 10 years or more. By 4 March, this figure had risen to 1,084.

After the election, the Government continued to harass those seeking to exercise their rights.

In September 2020, the authorities began pressing charges against opposition figures, human rights defenders, journalists, lawyers and ordinary citizens, a trend that continued throughout 2021, with the Government also passing a raft of legislative amendments that further curbed the exercise of fundamental freedoms.

By October, 270 NGOs had been closed down, and by the end of the year, 32 journalists had been detained and 13 media outlets declared “extremist”.

Lawyers who defended dissidents, spoke out about human rights violations or brought cases to UN human rights mechanisms, were detained, intimidated, faced disciplinary sanctions or were even disbarred.

As of November 2021, 36 lawyers had lost their licences, said OHCHR.

OHCHR’s examination found that “individuals were targeted following a consistent pattern of unnecessary or disproportionate use of force, arrests, detention – including incommunicado detention – torture or ill-treatment, rape and sexual and gender-based violence and the systematic denial of due process and fair trial rights”, said a press release accompanying the report.

The report also concludes that the scale and patterns of the violations identified, their widespread and systematic nature, and the evidence of official policy, knowledge and direction of policy implementation by Belarusian authorities, requires further assessment of the available evidence from the perspective of applicable international criminal law.

The failure to effectively investigate human rights violations contravenes Belarus’ obligations under international human rights law, says the report, adding that beside the lack of investigations, “there was an active policy to shield perpetrators and prevent accountability, reflected in the level of reprisals, intimidation of victims and witnesses, attacks on lawyers and human rights defenders”.

The report makes detailed recommendations to Belarus and other States, to work towards accountability through available legal processes, for serious violations of international human rights law in Belarus. 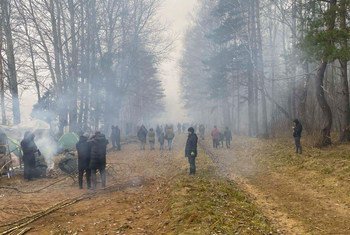 Independent UN experts expressed deep concern on Tuesday over allegations that human rights defenders have been threatened at the Polish-Belarusian border, including media workers and interpreters. 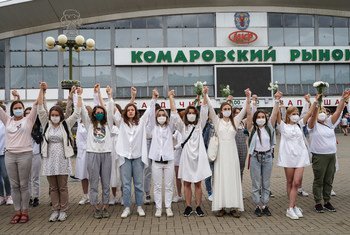 While women in Belarus overall are being denied rights and freedoms, female political activists are subjected to enforced disappearances, torture, ill-treatment and exile, an independent UN human rights expert told the General Assembly on Tuesday.