© WFP/Sayed Asif Mahmud
Women in Bangladesh harvest vegetables as part of a livelihood programme to ensure their family’s food security.

Investing in women’s economic empowerment yields enormous dividends for peace and prosperity, the head of UN Women told the Security Council on Tuesday, stressing that countries where women are economically marginalized and shut out of the workforce are much more likely to go to war.

“We have an opportunity to do things differently in 2022”, declared Executive Director Sima Bahous, who - addressing the Council on International Women’s Day – recalled the uptick in military spending, military coups, seizures of power by force that followed the onset of the COVID-19 pandemic, erasing gender equality gains that took decades to achieve.  “It is clear to me, more than ever, that we need another model of leadership.”

Describing women’s inclusion in economic recovery as “an essential element” in the pursuit of peace, she said women are more likely to spend their incomes on family needs and make a larger contribution to recovery.  Yet, post-conflict reconstruction and investment are still dominated by – and overwhelmingly benefit - men.

The UN Women chief explained that patterns of exclusion, discrimination and antiquated gender norms keep women away from employment, land, property, inheritance, credit and technology - a script that plays out across all situations on the Council’s agenda.

She expressed particular concern about the impact of a new “gender apartheid” in Afghanistan, where women’s employment has plummeted sharply since the Taliban takeover - while in Yemen, the world’s largest humanitarian emergency, closing gender gaps in women’s participation in the workforce, would have increased the country’s gross domestic product (GDP) by 27 per cent.

We cannot expect women to build peace if their lives are constantly under threat. In my address to the @UN #SecurityCouncil, I urged the international community to keep women &amp; girls at the centre of humanitarian efforts &amp; to ensure that all action is gender-responsive #IWD2022 pic.twitter.com/66rRka0CRD

Part of the problem …or the solution?

She explained that private actors are often part of the problem – not simply in extractive and agribusinesses, but increasingly, in telecommunications platforms that have a major role to play in facilitating inclusion and preventing hate speech and targeted reprisals.

She pressed the Council to use resolutions on the Central African Republic and the Democratic Republic of the Congo, for example, to call for women’s meaningful inclusion not only in peacebuilding, conflict prevention and recovery, but also in decision-making, gender analysis and spending trackers.

In turn, she invited the private sector to play a larger role in the Women’s Peace and Humanitarian Fund, which has supported more than 500 women’s organizations in 26 countries since 2016.  “There is much more that can be done to multiply by five the financing for women’s organizations in crisis settings by 2030, as requested by the Secretary-General,” she assured.

The Compact on Women, Peace and Security and Humanitarian Action – which aims to move the needle on these issues over the next five years – could use more engagement by multilateral development banks and the private sector, to help strengthen social protection mechanisms, promote women-owned social enterprises and address discriminatory legislation.

“We have the blueprint and the business case to support women’s economic inclusion,” she said.  “What we need is political will to pursue it.”

Kristalina Georgieva, Managing Director of the International Monetary Fund (IMF), said the war in Ukraine stands as a clear reminder that fragility and conflict impose a terrible cost on human life.  Speaking directly to the women of Ukraine, she said: “We admire your courage.  We share your pain.  We stand with you.  We support you.” The Fund is moving quickly to do what it can to support the Ukrainian people.

Stressing that crises – whether spurred by conflict, pandemics or economic and trade emergencies - threaten to set back years of progress on gender equality, she said that twice as many women as men, lost their jobs during the COVID-19 crisis due to low social protection, among other factors.

Women are also 20 per cent below men in labour market participation.

The world has also seen tremendous learning losses:  Over the lifetime of generations affected by the pandemic, $17 trillion will be lost because of the lack of educational attainment.

As dramatic as these effects are, she said overcoming them can provide a “massive injection” of prosperity, stressing that if sub-Saharan countries reduced gender-based violence closer to the world average, they could see long-term GDP gains of 30 per cent.

UN Photo/Manuel Elías
Mariam Al Mheiri, Minister for Climate Change and Environment of the United Arab Emirates and Security Council President for the month of March, chairs a meeting on women and peace and security.

She said gender equality is critical for growth, resilience and socioeconomic stability, stressing that “it matters tremendously when women and girls can reach their full potential.”  Improving gender equality can raise economic growth, strengthen family and community resilience, and enhance financial stability.

“We know societies with more gender equality tend to be more resistant to violence and conflict,” she said.  Yet too often, women remain excluded from decision making.

She urged international organizations, Governments and the private sector, to work together to close gender gaps and improve development prospects.

For its part, IMF is “relentlessly” focused on helping its members design and implement economic policies that ensure greater resilience and growth, she said.  It is particularly targeting social spending in efforts to improve education, health care and social protection, and as a result, create stronger societies.  A country-tailored approach is vital.

“Women and girls are themselves powerful agents of change”, she said, pointing to examples in Northern Ireland, Colombia and in Liberia, where the women’s movement helped to bring about an end to the civil war.  To all women and girls, she offered support: “Believe in yourselves.  Dare to reach your full potential.”

Moussokoro Coulibaly, President of the Network of Women Economic Operators in the Ségou region of Mali, said her organization supports women’s economic recovery and the engagement of women in peace and social cohesion efforts.  It brings together 7,847 women and works with 120 local women's organizations and women's groups.

UN Photo/Evan Schneider
Moussokoro Coulibaly, President of the Network of Women Economic Operators in the Ségou region of Mali, addresses a UN Security Council meeting on women and peace and security.

During and after conflict, there is a sharp rise in the number of female-headed households.  “It is thanks to their efforts that our communities and families have remained resilient.”

Noting that social and cultural norms are used to justify harmful practices against women's rights, and that financial resources are often not adapted to the activities that women economic actors lead, she said all these factors hinder women’s participation in public decision-making.

In Mali, a demand for inclusion

Undaunted, she emphasized that women are the pillars of their families and communities.  “We play a role in building peace.”  Wherever women are active, they commit to social cohesion within their communities, in local conflict resolution initiatives, in welcoming internally displaced people and survivors of gender-based violence, in educating children and in raising awareness of non-violence and peace.

It is imperative that women’s empowerment is at the core of resolutions, peace treaties, and programs for sustainable peace.  She pressed the United Nations to facilitate women’s access to sustainable and flexible funding, and to support Governments in the establishment and implementation of policies that promote women’s economic empowerment. 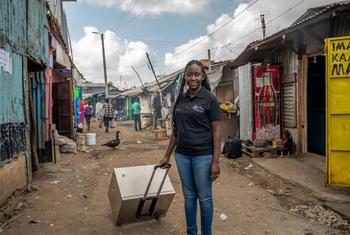 Norah Magero, a Mechanical Engineer and Renewable Energy Expert from Kenya, is helping communities adapt to the changing climate, in the face of gender discrimination. 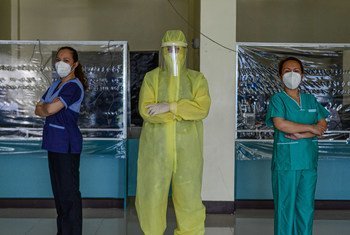