Attacks on kindergartens and schools have been a sad reality for children in eastern Ukraine over the last eight years, the UN Children’s Fund, UNICEF, said on Friday. Since the beginning of the conflict, more than 750 schools have been damaged.

On Thursday, according to media reports and the Ukrainian Government, shells fired by separatists in the east, hit and damaged a kindergarten in the Luhansk region. There were no reported casualties.

Attacks on kindergartens and schools have been a sad reality for children in eastern Ukraine over the past eight years.We call on all parties to respect the Safe Schools Declaration and protect children and their families from attacks.#NotATarget https://t.co/QM57QM0mzL

In a statement, the UN agency said that attacks on schools - since fighting began in the eastern region between Government forces and mostly pro-Russian separatists in 2014 - have been disrupting access to education for thousands of children on both sides of the contact line.

Furthermore, the agency said children in eastern Ukraine live in one of the world's most mine-contaminated stretches of land. “Every day, they live, play, and go to and from school in areas littered with landmines, unexploded ordnances, and other deadly explosive remnants of war”.

Highlighting that the conflict has taken a severe toll on the psychosocial wellbeing of an entire generation of children, UNICEF called on all parties to protect children and their caregivers from attacks.

Calling on all parties to respect the Safe School Declaration, the agency added that protection must be provided to keep children and their caregivers safe, regardless of the circumstances they might find themselves in.

According to recent data, for children living in conflict, education has become even more dangerous. In 2020, there were 535 verified attacks on schools, an increase of 17 per cent compared to 2019.

The Safe Schools Declaration which opened for State endorsement in Oslo, Norway, in May 2015, is a commitment to better protect students, teachers, schools and universities during armed conflict, to support the continuation of education during war, and to put in place concrete measures to deter the military use of schools.

To date, 111 States have endorsed the Safe Schools Declaration. Ukraine did so in November 2019.

“Educational facilities should remain a safe space where children can be protected from threats and crises and a haven where they can learn, play, and grow to their full potential”, the statement reiterated.  “A child's right to education cannot be safeguarded in conflict settings without education itself being protected”, UNICEF underlined.

UNICEF on the ground

Since the onset of the conflict, the UN agency has been on the ground across eastern Ukraine, delivering psychosocial support and mine risk education to over 180,000 children, youth, and caregivers.

Reiterating its commitment to continue to work with conflict-affected communities to provide much needed humanitarian support, UNICEF said that it will continue to address the urgent needs of the most vulnerable children and families. 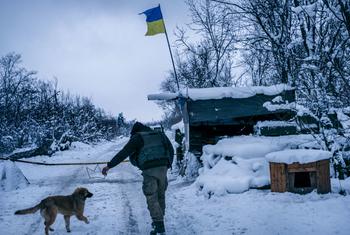 With tensions continuing to mount over the Ukraine crisis, UN Secretary-General António Guterres said on Friday that he still believed military conflict in Europe “will not happen” – although if it did, “it would be catastrophic”. 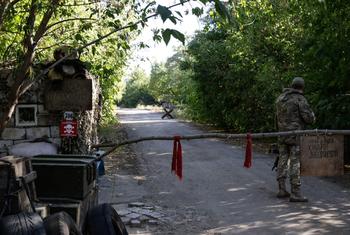 Amid competing narratives of events unfolding swiftly in and around Ukraine - one detailing the withdrawal of Russian troops from the borders and another proclaiming that an attack is imminent – the UN political affairs chief called on Thursday for the parties to make meaningful progress on implementation of the 2015 Minsk agreements, as she briefed the Security Council.