© UNOCHA/Maxime Nama
Disabled girls play basketball in the Democratic Republic of the Congo.

The Global Disability Summit began on Wednesday in Oslo, where UN Secretary-General António Guterres urged all countries to do more to put people living with disabilities “front and centre” of their post-COVID recovery plans.

In opening comments to the meeting - hosted by the Governments of Norway and Ghana - the UN chief insisted that people with disabilities were often the poorest and most disadvantaged members of society.

During #COVID19, many people with #disabilities have been denied their basic human rights.The Global Disability Summit is our chance to take action!Join the conversation to see how you can #CommitToChange: https://t.co/j9Rc5Cl23B#StandUp4HumanRights #GDS2022 pic.twitter.com/oMSL3WrI76

He said that persons with disabilities were dying “at vastly higher rates”, all because they faced “persistent barriers in health systems”.

In developing countries “which are strangled financially”, Mr. Guterres noted that people with disabilities were among the first victims.

Turning to education, Mr. Guterres said that as schools have had to shut because of the coronavirus, many students with disabilities have been left without access to technology and assisted learning devices, making effective remote learning impossible.

According to the UN Children’s Fund, UNICEF, there are 240 million children with disabilities in the world.

Half have never attended school, the agency said on Wednesday, while up to one in three do not eat enough decent food to grow and thrive.

In a bid to ensure that all children with a disability have access to education, health, emergency response, social protection, family and community life, UNICEF pledged on Wednesday to mainstream disability in all of its research.

“Assistive technology like wheelchairs, prosthetics, hearing aids and glasses give people with disabilities the chance to overcome barriers and demonstrate what they can do, rather than what they cannot,” said the former UNICEF Executive Director, Henrietta Fore, who stepped down earlier this month.

© UNICEF/Jannatul Mawa
A disabled teenage boy plays badminton in front of his house in Bangladesh.

The UN Secretary-General also warned that “workers with disabilities – who were already experiencing exclusion and marginalization – are often the first to lose their jobs and the last to be re-hired”.

To address these issues, among many others, Mr. Guterres called for decisive action to promote the rights of persons with disabilities in every corner of the world and in every facet of life.

“Everyone, everywhere must be free to go to school, to access health care, to start a family, have decent work and participate fully in all spheres of economic, social, cultural, and political life,” he said, before calling for reforms to the global financial system, to allow “far greater investments in disability inclusion, to create accessible environments and opportunities everywhere”.

Echoing the Secretary-General’s warning that women and girls with disabilities who were already experiencing double discrimination, now face even higher risk of violence and abuse because of the pandemic, the UN Population Fund UNFPA said that women with disabilities were up to 10 times more likely to experience sexual violence.

To promote action in support of the rights in this arena of people with disabilities, UNFPA has unveiled a poster campaign in subway stations of the Norwegian capital and online.

Taking place from 16-17 February in Oslo, the second Global Disability Summit represents a collective effort to accelerate the implementation of the UN Convention on the Rights of Persons with Disabilities (CRPD), as well as the principle of “Leave No One Behind” and building back better and more inclusive after COVID-19. 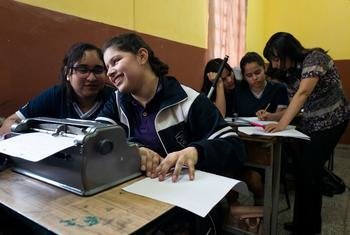 The COVID-19 pandemic has shown how critical it is to ensure essential information is accessible to everyone, including people living with disabilities.  On World Braille Day, observed on 4 January, UN agencies have been highlighting how they are promoting a disability-inclusive response to the crisis. 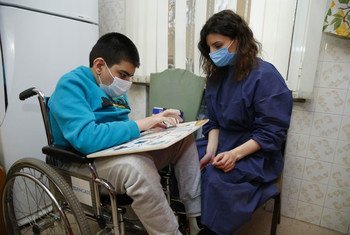 Marking the International Day of Persons with Disabilities, the United Nations Secretary-General, António Guterres, said on Friday that those with a disability were among the hardest hit by the pandemic.