© UNICEF/Patricia Willocq
Two children play outside while their parents participate in a workshop about online security and positive parenting practices in Guatemala.

With more children and young people spending time online, cyberbullying is the top concern for their safety when using the internet, according to a survey carried about by the International Telecommunication Union (ITU) on two social media platforms.

In the lead up to Safer Internet Day this Tuesday, 8 February, the UN agency polled its followers on Twitter and LinkedIn to find out what worries them most about children being active online.

We all have a role to play in ensuring the #OnlineSafety of our children. Here’s how you can take action on your role this #SaferInternetDay https://t.co/WiEu3cvJxY pic.twitter.com/8PUC4xpBVZ

They were asked to rank three common online fears: cyberbullying, data protection lapses, and the threat of grooming, which refers to abusers deliberately exploiting children online.

Roughly 40 per cent listed cyberbullying as the chief concern, with the two other choices at 27 per cent and 26 per cent respectively.

Respondents also cited other fears that were not featured in the poll, such as the risk of excessive screentime, or whether children are aware of mechanisms for reporting online threats.

That cyberbullying emerged as the top concern is hardly surprising, considering how the internet permeates nearly every facet of life.

Young people spend more time online than the rest of the population, ITU said.  an estimated 71 per cent of people aged 15 to 24 using the Internet, compared to just 57 per cent for all other age groups.

The Internet has also evolved over time, giving rise to the emergence of new threats, making the protection of children and youth online ever more critical.

ITU recalled that the problem of cyberbullying inspired Gitanjali Rao, TIME magazine’s first-ever Kid of the Year, to use technology to tackle the issue.

Speaking to UN News last November, she described it as like “the spellcheck of bullying.”

Children receive instantaneous feedback on their draft messages, thus allowing them to reconsider or modify what they have written. As the Kindly website puts it, the goal is to “end cyberbullying one message at a time.”

Kindly is the result of a collaboration between Ms. Rao and the UN children’s agency, UNICEF, which is developing it as a Digital Public Good.

The ITU has several programmes that address cyberbullying, including a game for younger children, and training for children, young people, parents, carers and educators.

UNICEF has also created an online resource that brings together specialists, international cyberbullying and child protection experts, and teamed up with Facebook, Instagram, TikTok and Twitter, to answer questions and offer advice. 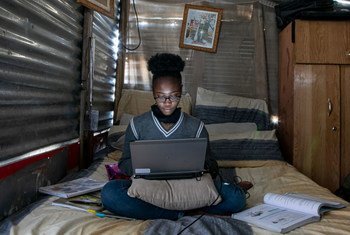 Leveraging the power of the Internet while tackling the risks of cyberspace is the focus of a UN meeting underway in Katowice, Poland, this week.