© UNICEF
Lebanon’s crisis is forcing young people to drop out of school.

More than four in 10 young Lebanese over just a 12-month period, reduced spending on education to buy basic food, medicine and other essential items, and nearly a third, have been forced to stop studying altogether.

These are some of the disturbing statistics contained in a new report published on Friday by the UN Children’s Fund (UNICEF), showing how the crisis is forcing young people to drop out of school and engage in ill-paid, irregular work just to survive and help feed their families.

The report also says that 31 per cent of young people are not in education, employment, or training. In fact, enrolment in educational institutions dropped from 60 per cent in 2020-2021, to just 43 per cent for the current academic year.

Speaking to UNICEF, Haneen, 17, said the money she and her family receive every month, is not enough for the expenses.

“Inflation is so high, and incomes haven’t matched this. Every month we have to choose a priority – rent, medicines, food. But we can never have them all”, she said.

According to UNICEF, unless action is taken to reverse current trends, decisions like these will have serious implications for future growth and social cohesion in the country.

“Investments are needed to ensure financial concerns do not prevent them from getting the education and skills they need to eventually find decent work and contribute to the stability and prosperity of Lebanon”, said the agency representative in the country, Ettie Higgins.

For Ms. Higgins, the crisis is already depriving adolescents and youth of the stability that is so important at their age.

“It should be a time for them to focus on their learning, their dreams, their future”, she explained.

While more and more young people are forced to drop out of education, they often find themselves ill-equipped to compete for increasingly scarce jobs and frequently end up taking up low-paying work in the informal sector.

Working youth have an average monthly income of about 1,600,000 Lebanese pounds (LBP), equivalent to about $64 at the black-market rate.

For Syrian youth in Lebanon, this number is about half, equivalent to a daily income of around a $1 a day.

Seven in 10 were considered unemployed and without any source of income, not having generated any money to live over the week prior to the survey.

Lebanon’s crisis has also led to an increase in other negative coping mechanisms besides reducing education costs.

About 13 per cent of families sent children under 18, out to work. Almost one in two young people reduced expenses on health, and only six out of 10 received primary health care when they needed it.

Because of all this pressure, Hind, 22, told UNICEF that her outlook for the future here is bleak.

Don't be afraid to be the change, fearless youngsters tell activists summit

Children affected by conflict cannot wait for their education 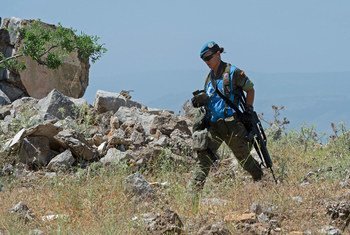 UN calls for investigation into attack against peacekeepers in Lebanon

The UN is urging authorities in Lebanon to conduct a quick and thorough investigation into an attack earlier this week against peacekeepers maintaining security and stability in the south of the country.