UN Photo/Eskinder Debebe
UN Secretary-General António Guterres (centre) lays a wreath in tribute to the victim’s of last year’s port explosion in Beirut, Lebanon, which took the lives of more than 200 people.

One of the UN Secretary-General’s most prominent stops during the second day of his visit to crisis-hit Lebanon was the port of Beirut, where he laid a wreath at the memorial for the victims of the explosion there which took the lives of more than 200 people.

The extent of the devastation has drawn comparisons within Lebanon, to the horrors endured by the residents of Hiroshima in 1945, after one of the two atomic bombs dropped on Japan at the end of World War Two, raised the Japanese city to the ground, killing tens of thousands. Locals refer to the infamous day on August 4, 2020, as “Beirut-shima”.

UN News is travelling with UN chief António Guterres, and in a tweet during a hectic day of meetings and events, he paid tribute to the victims of last year's Beirut Port blast, stressing that "an impartial and transparent investigation into this tragic event is crucial to ensure justice.”

For him, “the Lebanese people deserve the truth.”

According to seismologists, the pressure of the explosion was equivalent to an earthquake measuring 3.3 on the Richter scale.

The first explosion occurred at 6:08 pm local time, after a fire broke out in a storage area containing a large amount of ammonium, followed by another massive explosion that caused great damage to the port, and large areas of the city.

The explosions killed some 217 people, injured more than 6,000, and displaced around 300,000 families, with losses estimated in the billions of dollars.

In his remarks in the Lebanese capital to journalists, including UN News, the Secretary-General spoke about his visit to the Harbor, saying it was a very emotional moment. “The suffering of the people, first of all, those that perished, their families, the wounded, the dramatic impact in the lives of so many people is something that of course generates very deep solidarity”.

On the other hand, he noted that he had been receiving messages from many victims demanding “the need for truth to be established, for the need for an independent investigation, that is able to produce that truth.”

He said he fully understands their concerns and hoped that the country’s institutions will be able to guarantee that the truth will come to light.

Fear of being forgotten

Despite intensely rainy weather, the Secretary-General also went the city of Tripoli in northern Lebanon, where he visited the Lydda Mixed School run by the United Nations Relief and Works Agency for Palestine Refugees (UNRWA).

UN News had interviewed Mr. Fadi Al-Tayyar, UNRWA Information Officer, on the eve of the Secretary-General’s visit to the school, and asked him about the importance of his meeting students and other refugees. He said the visit comes at a crucial and difficult time for Lebanon and for Palestine refugees:

Today with Lebanon Prime Minister @Najib_Mikati, I discussed the current economic and financial crisis gripping the country, and the reforms that are needed to put the country back on track – politically, economically and socially. pic.twitter.com/7Rt9BM72hg

For him, this visit by the UN chief’s visit is “an explicit recognition that this refugee still exists, and that the United Nations considers him, that his problem still exists.

“Therefore, we must act. All of us have to find a solution to this problem, and his coming to this school and his attendance and meeting with these students is also a message in the same context, and there is no doubt that this will be an opportunity for them to express what they feel, their problems, and their concerns”.

At the UNRWA-run Lydda school, Mr. Guterres met among others, parents and children enrolled in the youth parliamentarian programme who shared their daily concerns and problems as Palestinian refugees in Lebanon.

Young Wissam said that some parents were forced to take their children out of school because they could not afford the bus fare to get to the classroom, due to the current crisis.

As for Jamal, a young Palestinian refugee who was displaced from Syria due to the ongoing war, he said that "often we sleep with empty stomachs because his parents could not provide for the family”.

Zeina pointed out the importance of the right to education for Palestine refugees, saying that education "is their only hope to change their lives." She hoped that the Secretary-General would continue to protect this right.

Zeina said she wanted to become an astronaut, but her family could not possibly afford that.

Expressing apologies and his personal concern to Palestinian children and parents for the situation they face, the Secretary-General acknowledged the importance of children's right to education and food, saying, that the UN was fighting “to get more support for UNRWA and to see if we can do the best for all of you - at school and in supporting families where that support is necessary."

On the other hand, the Secretary-General affirmed that the UN was striving as best it can, to restore the peace process, and that it believes in is the existence of two States, Israel and Palestine, living in peace side-by-side, which could ultimately bring an end to the predicament faced by Palestine refugees in Lebanon and elsewhere.

But he admitted that it is not an easy job, stressing at the same time “the importance of not losing hope” for a better tomorrow.

Rehabilitation of the Mina Corniche

Also on the Secretary-General's agenda in Tripoli was a visit to the rehabilitation project of Corniche El-Mina and waterfront, which was carried out in cooperation between the UN Development Programme (UNDP) and ILO (International Labour Organization), funded by Germany.

This project was implemented through Cash-For-Work and Employment-Intensive programmes.

In an interview with UN News, Ms. Iman Al-Rafi'i, Chargé d'Affairs at El Mina Municipality, spoke about the impact of the rehabilitation of the Corniche on the city's residents, and the positive results they could look forward to.

As for the second, she said the rehabilitation contributed to the promotion of tourism in the region, which leads to the creation of job opportunities yet again by strengthening the tourism sector and services, such as restaurants and cafes.

I was deeply moved by the stories and insights shared by refugee students &amp; parents at an @UNRWA school today in Lebanon.UNRWA is helping over 500,000 children reach their dreams &amp; achieve their full potential. They deserve our full support. pic.twitter.com/hB1f0zgpz7

Thirdly, this project provides an incentive to visit the reserves on islands adjacent to the city of El Mina, said Ms. Al-Rafei noting that this was very important for local development, especially since the city of El Mina, like most cities in Lebanon, currently suffers from widespread social and economic deprivation, and it is one of the poorest urban areas on the Mediterranean coast.

Through the UNDP and ILO economic recovery projects, the corniche sidewalk and waterfront were rehabilitated, providing around 48,000 days of work for locals, and around 1,200 short-term jobs, which went to the most vulnerable Lebanese and displaced Syrians.

The infrastructure development of the corniche included excavation, installation of a storm network, sewage network and manholes, electrical and mechanical works, landscaping, tilling, installation of balustrades, and asphalt and concrete works.

In a press conference following those meetings, the Secretary-General expressed his optimism, saying "there is a clear guarantee that elections will take place at the beginning of May before the constitutional date is defined and this means that Lebanon will create the conditions to renew its Parliament and with that, hopefully, to establish new political stability for the future.”

On the other hand, he expressed his great admiration for the work that the Government is doing in terms of preparing for negotiations with the International Monetary Fund (IMF), saying that “a lot of technical work has been done.

“I am happy that the United Nations team is fully supporting the Government and I hope that the necessary political conditions will be created as soon as possible to allow for formal negotiations to take place. But it is encouraging to see how much serious work is being done”.

While expressing his deep solidarity with all the victims of the port, he also expressed his hope for the country's ability, not only to rebuild the port, but also to rebuild its economy and create the conditions for achieving the prosperity and development that the Lebanese people deserve.

The Secretary-General also met with religious leaders where they affirmed their commitment to the values ​​of openness, tolerance and coexistence as the core of Lebanon's identity and stability.

The participants stressed in a joint Communiqué the importance of safeguarding these values, which are at the core of all faiths, especially at this difficult time of grave financial and socioeconomic crisis that is heavily impacting all in Lebanon.

Participants expressed their determination to focus on what unites the country and brings its people together, and they encouraged their communities to do the same and to adopt dialogue as a means of resolving differences in a spirit of consensus and togetherness.

During his meeting with a group of Lebanese women representing various orientations and affiliations, the Secretary-General stressed the importance of expanding the scope of participation, inclusion and representation of young men and women in national political processes, noting that in his meetings with political leaders, he had emphasized the importance of this issue.

He stressed that comprehensive, timely, free, fair and transparent elections are the key to maintaining democratic practices in Lebanon and to ensuring that the voices of the Lebanese, especially the younger generations and women, are heard. 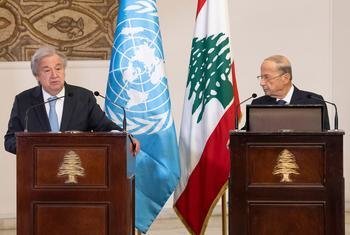 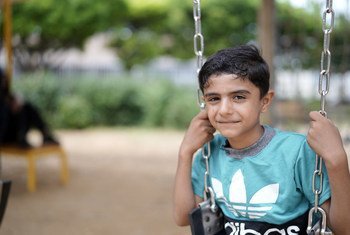 ‘UN stands with the people of Lebanon’, declares Guterres

Elections next year will be key to a better future for Lebanon, UN Secretary-General António Guterres said on Friday ahead of an official visit to the country later this weekend.