After one of the busiest years in the history of the Human Rights Council, President Nazhat Shameem Khan insisted on Thursday that the UN forum remains more relevant than ever, citing action on COVID-19 vaccine inequity, climate change and no less than five Special Sessions in Geneva.

Speaking to the UN as she prepares to step down from her one-year term at the Council at the end of the month, Ambassador Khan also looked ahead to her new role at the International Criminal Court (ICC), where her appointment as Deputy Prosecutor was announced at the start of the week.

Created by the UN General Assembly in 2006, of the most important roles of the Council is to address immediate and important human rights violations around the world – not least the coronavirus pandemic and vaccine inequity - Ambassador Khan explained.

“There were some substantive issues from the COVID 19 pandemic, and one was the access to vaccines,” she said. “This is a conversation that is happening everywhere in the world, whether within countries, we have an equal access to vaccines by all communities, especially those which are most vulnerable.

“And secondly, are we having an equitable transfer of vaccines among countries. So, I think that conversation was really amplified this year.”

I think many more countries have recognized that climate change is a relevant discussion in every UN agency, in every institution

And in a year that brought nations together for the COP26 Climate Summit in Glasgow, the Human Rights Council amplified calls for action on cutting emissions from a rights-based perspective, despite historic resistance in some quarters, Ambassador Khan continued.

“There are many people in the world who believe that the only conversation you can have on climate change is in Bonn with the UNFCCC (United Nations Framework Convention on Climate Change), and that it is none of the business of the Human Rights Council to speak about issues which are relevant to the environment. But increasingly, I think many more countries have recognized that climate change is a relevant discussion in every UN agency, in every institution. It's the business of everyone.”

By way of example of this new awareness over the risks posed by climate change, Ambassador Khan pointed to increased international activity and pronouncements on the issue, within the sphere of human rights.

Then came comments, recommendations and reports about climate change from specialised bodies appointed by the Council, known as UN Special Procedures and Treaty Body experts. This included the Committee on the Rights of the Child, which issued a report on the impact of climate change and children.

It was this kind of foundational work “over many, many years” in the climate change versus rights nexus that work culminated in two landmark resolutions at the Council this year on climate and environmental rights, Ambassador Khan explained.

“One …recognized the right to a healthy, safe and sustainable environment; and the second was the creation of a mandate for climate change and human rights. Both are incredibly significant for the world. Of course, they're very important to small island States, particularly in the Pacific, but they are significant for the whole world. And the fact that there was such an overwhelming level of support for both resolutions, I think, really indicate an increasing consensus”, she said.

Reflecting the importance placed on achieving gender equality at the UN, Ambassador Khan underscored the Council’s support for this, and inclusivity in general, in particular for small island States.

But she explained that as only the third woman to sit in the President’s seat at the Council, although she was proud of her achievement, “we need to do a lot of self-examination” about why so few women have come before her.

“Often when people speak at the Council, the question should be, are they speaking at a level which makes decisions because often in organizations and institutions, you will find 50 per cent and more representation of women, but they are often at the level where they are not they're not really making the decisions. So, the issue is, where is the leadership of women? I think this is the very important issue for the Council. How many ambassadors in Geneva are women who are still in the minority, although there's a very, very good network.”

On a positive note, Ambassador Khan added that “after much effort and commitment”, more than half of the Council’s independent experts were women. “So, I think we've achieved something there, but it could fall back at any time,” she said. “I don't think we should be complacent about it.”

Responding to concerns that any politicization of the Council risked paralyzing its work - a longstanding criticism of the Council and something that the body’s next President raised shortly after his appointment – Ambassador Khan said that the body’s diverse range of views was no surprise, given its global membership of 47 States.

The ICC is not just a court, it's also an international institution and it's also a multilateral body

It was also important to note that there was no division of the Council “in two bands of sort of developed countries and developing countries”, she said. The current dynamic was more “nuanced”, she continued, with smaller countries that were “less likely to be connected to any large power group” responsible for promoting “helpful and productive” exchanges.

After presiding over no less than five Special Sessions at the Human Rights Council in 2021, in addition to the three regular sessions held in February, June and September, Ambassador Khan can expect little rest before taking up her next challenge at International Criminal Court (ICC).

The former Fijian criminal prosecutor and High Court judge will take with her a greater understanding of the world of international cooperation “and the importance of diplomacy”, she insists.

“The ICC is not just a court, it's also an international institution and it's also a multilateral body. And I believe that in fact, this particular step that I take now is a logical conclusion of the way that my career path has developed for the fight for my life.

“So, I think that it is going to be an extremely challenging experience, but it is one for which I believe my career has prepared me for. I look forward to it. As to what areas of work I would be covering, that is, of course, entirely at the discretion of the (ICC) chief prosecutor (Karim Khan). And I don't know that yet. I'm assuming that in the next few months it'll become clearer.”

UN chief: ‘We cannot defeat a pandemic in an uncoordinated way’

COVID-19: WHO urges Europeans to be smart and safe this holiday season 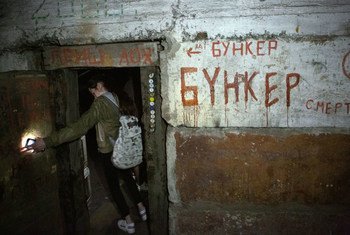 The UN Human Rights Council heard on Wednesday that fundamental freedoms in Ukraine have been squeezed in Government-controlled areas, as well as across the contact line in eastern territories, held by mainly pro-Russian separatists.