The signing of the Final Peace Agreement five years ago generated hope and inspiration in Colombia and throughout the international community, and UN Secretary-General António Guterres said on Wednesday that the achievements are undeniable, and the country’s people should be proud.

“As we take stock today, we can confidently affirm that the implementation of the peace process is taking deep roots,” Mr. Guterres said in Bogotá during an event commemorating the 2016 peace deal between the Colombian Government and the Revolutionary Armed Forces of Colombia, or FARC-EP, that ended the Western hemisphere’s longest-running war.

The UN chief @antonioguterres visited Colombia this week to mark 5 years since the signing of the Peace Agreement.He visited one of the most impacted areas by the 50-year conflict. pic.twitter.com/k56OrmnFIO

Speaking from the headquarters of the Special Jurisdiction for Peace, one of the main justice mechanisms created as part of the peace deal between the Government and the guerrilla movement, the Secretary-General said the fifth anniversary is a testimony to the commitment of the parties, but also of the State institutions and the vibrant Colombian civil society, working together despite many difficulties, including tackling the COVID-19 pandemic.

An investment in peace

Among the “undeniable achievements” the accord has yielded, Mr. Guterres noted the fact that a guerrilla movement that had waged armed combat for half a century is today a political party and that the majority of ex-combatants, some 13,000, are striving “admirably” to build new lives.

Moreover, he recalled his visit on Tuesday to Antioquia’s mountainside village of Llano Grande, where he had witnessed “determination in the face of adversity and uncertainty” as the local community, ex-combatants and police are now living and working side-by-side.

“I also witnessed how, with Government action and support, the expansion of locally designed development and social protection programs are bringing peace dividends to conflict-affected communities,” the Secretary-General said, adding that: “Ensuring the sustainability of these efforts will be critical in the future.”

“In a world marked by conflicts, many of them without an end in sight, a peace agreement negotiated to end a conflict that many believed to be unsolvable is something extremely unique and valuable,” stated the UN chief, adding later: “Colombia has sent a clear message: The time has come to invest in peace.”

UNMVC
Secretary-General António Guterres talks to villagers in Llano Grande, Colombia, where he witnessed how the peace process was developing in Colombia.

Yet, despite the solid progress, the Secretary-General cautioned that all sides “must be clear about the risks” that may threaten the long-term sustainability of the agreement.

“Ethnic communities and women and girls are always particularly affected,” said the UN chief, also spotlighting other factors that could contravene the deal, including violence by armed groups in connection with drug trafficking; threats and murders of ex-combatants, social leaders and human rights defenders, often women and indigenous populations; displacement and confinement; violence against women and sexual violence; and the recruitment of children.

Since the signing of the Peace Agreement, more than 300 ex-combatants and 477 human rights defenders and civic leaders have been killed, according to data from the United Nations Verification Mission in Colombia.

“Each death is itself a tragedy,” Mr. Guterres continued. “Each death sends a devastating message to these communities that still await the promises of the Accord.”

“I am confident of the President's determination to ensure that the security provisions of the Agreement will be fully implemented, as well as all the [articles] on rural reform, solving the problem of illicit drug trafficking and all the complexity that comes from the implementation of the Peace Agreement,” the Secretary-General stated.

Challenges are part of the process

Despite these challenges to peace, Mr. Guterres said “it is not too late to reverse this trend”, and stressed that it would be necessary for the full implementation of the peace accord’s security provisions, as well as those dealing with rural reforms and tackling drug trafficking.

He recalled that the Peace Agreement itself reflected the reality that transformations of this magnitude will take time. “There are still ten years left [for] what was initially planned” and “the challenges are part of the peace processes.”

“There are many issues on which you can disagree in a democracy, but peace can no longer be one of them,” he argued, before calling on Colombia “to remain on this path of peace-building and persist in overcoming challenges”.

To this end, he encouraged all Colombians to follow the roadmap set out in the Peace Agreement, which not only sought to silence the weapons, but “aimed at transforming the root causes of the conflict and beginning to heal the wounds, so that the atrocities [here] committed do not happen again.”

With those goals in mind, the UN chief noted progress on “the creation of a transitional justice system that aims at justice for victims and survivors, as well as ensuring lasting peace.”

Indeed, he said: “We have seen historical indictments for war crimes and recognition of unprecedented responsibility. We have seen emotional encounters that unite victims and those responsible. And we have seen how families finally come out of the uncertainty about the fate of their missing loved ones.”

Concluding his remarks, the Secretary-General said that “after more than five decades of conflict, and a deep awareness of the suffering it caused, we have a moral obligation to guarantee that this peace process is successful.”

Ahead of his remarks, the Secretary-General heard testimonies from victims, including of Ana Sofía Martínez, whose father disappeared 20 years ago after he was detained by the FARC-EP.

After calling on all parties, the Government and FARC-EP, to put aside their disagreements and fulfill their obligations, Ms. Martínez said she felt tired, sad and happy.

“Tired of bureaucracy and protocol; sad because disappearances continue to occur and the guarantees that the State gives about post-conflict activities are increasingly vague; and happy because in the face of so much adversity, we continue dreaming, sustained by infinite hope and more than one hundred thousand reasons. For the people still missing, we must hope. And we insist on action,” she affirmed.

Another participant was Father Francisco de Roux, President of the Commission for the Clarification of the Truth, who listed the positive actions by one side or another, but also stressed that unfortunately, no steps had been taken to achieve what he called “the great peace”: a peace that is above all party interests.

Also participating in the event were former President Juan Manuel Santos and former FARC commander Rodrigo Londoño, signatories of the Peace Agreement, and current President Iván Duque, as well as the current President of the Special Jurisdiction for Peace, Eduardo Cifuentes Muños, and other actors who promoted the negotiations that led to the signing of the Agreement. All recognized that there are still many challenges, but stressed that the peace process continues to move forward.

Colombia can be an inspiring example for other conflict-torn countries

Later in the day, during a press conference alongside President Duque, the Secretary-General, reflecting on how far Colombia had come in the past five years and acknowledging the challenges the country still faced, said that its example had inspired him to make an urgent plea for an immediate ceasefire in crisis-gripped Ethiopia.

Calling on the protagonists to immediately and unconditionally cease hostilities and “save the country”, Mr. Guterres called on all sides to “allow a dialogue between Ethiopians, resolve the crisis and allow for Ethiopia to once again contribute to the stability of the region.”

As for the situation in Colombia, the UN chief acknowledged civil society and its leaders, some of whom he was scheduled to meet later in the evening, for their “great commitment to peace.”

Mentioning representatives of women’s groups, indigenous and Afro-Colombian organizations, human rights groups, and environmental and youth organizations, the Secretary-General said: I echo their calls that the Peace Agreement must be implemented in a comprehensive manner and that vulnerable communities, such as women and men social leaders, ex-combatants and environmental leaders be protected.”

Shortly before the press conference, the Secretary General visited a fair that was being held in Bolívar Square is the main square of the Colombian capital Bogotá. There, he walked among the stalls and tables displaying wares and crafts that had been produced by victims of Colombia’s conflict, as well as ex-combatants, among others. Some 55 projects were exhibited, many of them with them produced with the support of various UN agencies.

UNMVC
UN Secretary-General António Guterres visits a fair in Bogotá where products are made by conflict victims and ex-combatants.
♦ Receive daily updates directly in your inbox - Subscribe here to a topic.
♦ Download the UN News app for your iOS or Android devices. 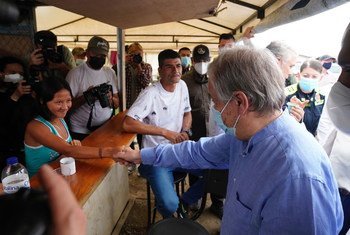 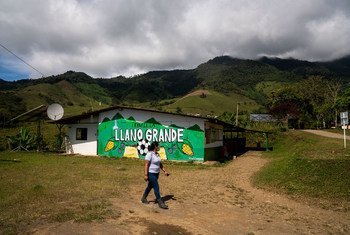 Feature: Five years after peace deal, Colombian town of Llano Grande is forging a ‘family’ out of disparate parts

UN Secretary-General António Guterres is headed to Colombia this week to mark the fifth anniversary of the signing of the peace accords that ended 50 years of conflict in the country, and his activities will include travel to the village of Llano Grande, where the townspeople and former combatants are working together to secure a better future.